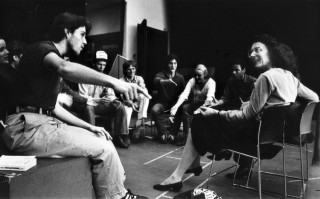 (Photo by Jessica Katz, courtesy of the Juilliard Archives)
November 2014

Beloved actress and former faculty member Marian Seldes died at home in Manhattan on October 6. She was 86. 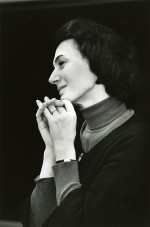 Marian Seldes in the 1970s at Juilliard.

(Photo by Jessica Katz, courtesy of the Juilliard Archives)

Seldes, who was born and raised in Manhattan, studied drama with Sanford Meisner and dance with Martha Graham (Juilliard faculty 1951-77). Her star-studded Broadway career included the singular honor of having Edward Albee create a role specifically for her—Julia, in A Delicate Balance—a role for which she won a Tony in 1967. Three decades later, she received accolades for a trio of Off Broadway Albee productions: Three Tall Women, The Play About the Baby, and Counting the Ways. Seldes entered the Guinness Book of World Records for her longevity in the role of Myra in Deathtrap, with nearly 1,800 performances starting in 1978; she was also nominated for a Tony for the role. She also logged more than 1,000 performances in Equus, which opened in 1974.

John Houseman invited Seldes to be one of the inaugural faculty members of the Juilliard Drama Division, which opened in the fall of 1969. As several of her colleagues recalled, part of her role was to be the good cop on the onerous Test (described below), the forerunner of today’s kinder, gentler Discovery Play. Seldes remained on the faculty until 1991. When she received an honorary degree from Juilliard, in 2003, The Journal quoted her 1978 memoir, The Bright Lights: A Theatre Life, on why she decided to begin teaching here. She wrote, “How is talent trained? By creating the proper atmosphere in which it can grow. If the technical skills of the actor are improving by being trained and tested, the natural gift for acting that led him to the theater will grow stronger.”

Amid an outpouring of grief for Seldes, Group 10 alum Ben Donenberg, the founding artistic director of the Shakespeare Center of Los Angeles, wrote that she was “a gifted, compassionate, intuitive, and passionate woman. She was an incredibly supportive teacher because first and foremost she was an actress.” He added that he was “a better artist for having felt and understood her support.”

What was your first impression of Marian Seldes?

Moni Yakim: You could tell she was a dancer. She moved like one, the way she walked, even the way she talked—she would speak, she’d take a bow, and she’d go out of the room, and come back. And when she talked to you, it was dramatic, like a low whisper, “My dahling, my dahling!” Her presence was incredible—graceful and powerful. You could tell immediately that she had an artist’s soul. She was not too interested in everyday little chores.

I was doing a movie, and I had never done one before, so I went to her to be coached. And she coached me similarly to how she worked with the students. Even if you did it badly, she would tell you it was wonderful. She would just give subtle pointers for how to improve. But she had such a positive outlook. And every time she was in the audience watching a show, she was a show to look at! Because she would be constantly giving you energy, leaning forward, she seemed like she was identifying, absolutely raving about it. Of course, then she would go to the faculty meetings, and talk about the flaws, and what wasn’t yet very good. But looking at her, you thought she was witnessing a miracle.

Was this her teaching philosophy?

Very much so. She wanted the students to be better, to do better, and when she watched an actor who was on stage, she was working with them, from the audience. She was such a loving presence, almost motherly. I came from a theater background, but later on I became a mime. Language, especially English, was not something I connected with, so when we were in faculty meetings, I had difficulty describing what I was doing, even though I knew perfectly well why I was doing it. And it was always Marian who came to my rescue, by helping me with words I was looking for, by encouraging me, by her presence, by looking at me—because you looked at her and you thought, “Wow, she’s getting all my ideas.”

That sounds exactly how she was with the students.

Her thing was, “You are such a beautiful actor. If you could just do a little bit more here, or find a more interesting choice there, you’d be brilliant!” That was her way to open up the actor. And she would give them criticism in a totally different way [than some of the rest of us]. Marian knew how to get the actor to improve in a very accepting manner.

Do you think she liked working here?

I think she loved working here. Definitely. She loved theater as an art, she was in a constant state of being transported into a different realm.

Why she was asked to join the program?

Liz Smith: She was called in for two reasons: 1) to do the Test [now called the Discovery Play], because it needed somebody who could be very sympathetic, but at the same time lead. The Test was designed to show the students how little they knew, and how far they had to come, which looking back sounds quite negative, though we didn’t mean it that way at the time. But having Marian in that spot made it less terrifying. And then when the philosophy [of the division] began to change, it was renamed, and it became an exploration, rather than a test. Marian also had great affinity for poetry, and at that time, we had some poetry courses, and she taught them, as well as acting. She had a great affinity for the Greeks.

She appears to have had great range—

Her range was incredible. And her courage! There was nothing she wouldn’t do. And I mean that in the best possible sense. I can’t think of anybody coming up who has that kind of power, that kind of aura, that kind of background. She was one of a kind.

How was she with the students?

She was an extraordinary teacher and a wonderful person. The word grace has cropped up a lot. And also gracious, which is slightly different. But she also had a very sharp, critical faculty and she could see right into the heart of problems. She was very good in faculty meetings, for that reason, because her perception was wonderful. But she was never unkind. Never sarcastic.

How did she teach?

She’d always be very astute, but also very gentle. And the students responded very well to that. And it was needed, because the rest of us could be very frank sometimes. And she took the edge off of our remarks. She led people gently, she didn’t try to force them. And they adored her! I mean of course there are always some who don’t take full advantage. But the serious students, you could tell how much she meant to them.

She was a joy to be with, and to know. One time she was playing in Three Tall Women in Woodstock, and she and Garson Kanin [the writer, to whom Seldes was married from 1990 until his death in 1999] came for lunch with me. There sat Marian, looking absolutely gorgeous, very elegant, and Garson in a straw hat. Having a meal with her was such a joy, because she would go off on all sorts of experiences she’d had, people she’d known in the theater, and so on. She was so intelligent, so well-read, and her background was so extensive in all sorts of areas.

She was incredibly funny! It was rather dry humor, and she always avoided cruelty. That didn’t mean she didn’t have the ability to criticize, she just chose not to use it. But she always had le bon mot.

When did you first meet Marian?

Jane Kosminsky: One night after my first tour with the Paul Taylor dance company in Paris, somehow I felt perfectly comfortable going backstage to see Marian [after seeing her perform] and telling her I thought she was terrific. She was very gracious, and six years after that, we wound up on the faculty here together. John Houseman had had hired her for what used to be called the Test, and she did it with such graciousness, warmth, and compassion. She looked at these kids and knew exactly where they were coming from, and how much they wanted to learn.

The year I started at Juilliard, I also started a repertory dance company, and Marian became my personal good luck charm. My dance partner and I wanted someone to see us through our first run-through, so we invited her. She came tiptoeing into the old studios on Eighth Avenue and watched with such love and such heart. And after I retired from performing and trained to become an Alexander teacher, I asked her to be my “body” to work on while I was coached, and Marian came every week for 10 weeks to take a class with me. That was really incredibly generous! But that was Marian.

She was always absolutely grounded, focused on the students, encouraging them to be daring—not to be afraid. She understood them because she was first and foremost an actor herself. She was beloved. She offered the students information about acting, obviously, but also a chance to be unafraid. Something else that stood out to me was her wit. And she never missed a performance and never missed a class—she never missed anything.