(Photo by Courtesy of Schott Japan)

The 2015 Focus! festival will celebrate the lively world of Japanese composers. Although some of their music has been heard in New York, the festival will bring together many new names and rarely heard compositions written in an unusually broad range of styles. (Photo by Zen On) 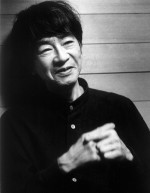 This festival is the result of my nearly 20 years of performing music by some of the best-known Japanese composers, which stirred a desire to find what lay beyond the small number of internationally known figures. To begin this journey, I turned to Graduate Studies faculty member Mari Kimura (D.M.A. ’93, violin), a violinist, composer, and electronics specialist. The diversity, quantity, and quality of new, unusual music I found through her advice and that of others in Tokyo, London, and New York amazed me, especially since I’d often been told that new music in Japan doesn’t have much of an audience outside Tokyo. The compositions that I heard and saw embrace virtually every imaginable style. Regrettably, for the most part I had to avoid pieces that use traditional Japanese instruments or vocal styles—or instruments that we do not teach, especially accordion.

Although Focus! is meant to give performance opportunities to our students, I felt there should be at least one piece using a traditional instrument in a prominent position. For this I selected Toshio Hosokawa’s Voyage X, for shakuhachi (Japanese flute) and chamber orchestra, which will have its Western hemisphere premiere by the New Juilliard Ensemble at the opening concert, on January 23. A Western flutist, however, cannot simply pick up a shakuhachi and expect to make a sound on it—and some shakuhachi are too big for most people’s hands, including, to my disappointment, those of my longtime colleague and friend Ralph Samuelson, the retired director of the Asian Cultural Council and a superb shakuhachi player. But he directed me to Marco Lienhard, a Swiss-born virtuoso who studied with the virtuoso for whom the piece was written and who will join us as soloist.

A couple of wonderful surprises awaited me, such as Japanese pianist Aki Takahashi’s recording of five wonderful and unusual tangos by Japanese composers. What Japanese festival would be complete without tangos?! Another surprise was the breadth of work from the generation born around 1930. For years we in the West thought that Japanese composition was still in its infancy and the only composers of note were Toru Takemitsu (1930-96) and Toshiro Mayuzumi (1929-97). Then I came upon an exceptionally dynamic piano concerto by Michio Mamiya (b. 1929), whose age has not diminished his youthful energy level. Fourth-year pianist Robert Fleitz (Pre-College ’11) leaped at the opportunity to learn it.

Mamiya’s concerto and Hosokawa’s Voyage X will be features of N.J.E.’s opening program, which will also contain music by Somei Satoh—a kind of Japanese Arvo Pärt (with baritone and D.M.A. candidate Christopher Herbert). Other composers on this program are Akira Nishimura and Misato Mochikuzi; the latter is one of several very interesting female composers whose work I encountered. The N.J.E. concert will be followed by four programs of solo and chamber music that will introduce a lot of unfamiliar names including Tomojiro Ikenouchi (1906-91), who studied in France and then returned to Japan, bringing with him both “new” French music (including Debussy and Ravel) and the entire French system of music education. Ikenouchi’s studies in France and his distinguished career as a teacher seem to explain the French sound of many older Japanese composers.

For the concluding concert, on January 30, Tadaaki Otaka will conduct the Juilliard Orchestra in a program that he conceived as a tribute to his friend Takemitsu. The concert will open with music by one of Takemitsu’s idols, Claude Debussy (“Nuages,” from Trois Nocturnes) and include Takemitsu’s Far Calls. Coming, Far! (with violinist Alex Shiozaki) and Twill by Twilight, as well as works by Akira Miyoshi (1933-2013) and Takashi Yoshimatsu (b. 1953). In a happy, unexpected Juilliard connection, the world premiere of the Takemitsu Far Calls. Coming Far! was played by Juilliard violin faculty member Ida Kavafian (Pre-College ’70; B.M. ’74, M.M. ’75; violin)  in Tokyo in 1980 with Otaka conducting.