When you sit down to watch Emmanuel Villaume conduct the Juilliard Orchestra in Alice Tully Hall on February 14, see if you can spot a Russian man with round glasses and a long white beard. He may be difficult to identify, but he will be there. His name is Nikolai Rimsky-Korsakov. Villaume will lead a program of early 20th-century music closely connected to Rimsky-Korsakov: works by Stravinsky, Ravel, Glazunov, and Mussorgsky. 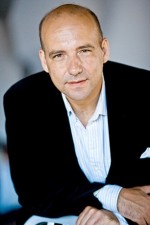 The energetic Feu d’artifice (Fireworks), by one of Rimsky-Korsakov’s students, Igor Stravinsky, opens the program. The piece’s 1909 premiere in St. Petersburg commanded the admiration of ballet impresario Sergei Diaghilev, who promptly commissioned Stravinsky to compose for his newly founded Ballets Russes. Stravinsky accepted, and from their collaboration were born The Firebird, Petrushka, and The Rite of Spring.

Rimsky-Korsakov died in 1908, not long after Stravinsky finished Feu d’artifice (though the younger composer had sent the score to the older one on the occasion of his daughter’s wedding, it’s not clear whether he had lived long enough to see it). But Rimsky-Korsakov’s comprehensive musical style, which drew from both Russian nationalism and the European mainstream, influenced countless composers after him.

After World War I ended, Diaghilev spoke to one such composer, Maurice Ravel, about turning this promising young Frenchman’s idea for an orchestral work based on waltzes into a ballet. Ravel brought Diaghilev La valse, a magnificent piece that at points seemed to trip over its own beats, obscuring the steady one-two-three rhythm of a waltz, only to quickly regain its footing. Diaghilev found it unsuited to a ballet, and though it was subsequently staged by Nijinska and Balanchine, it has mostly been performed as what Ravel called a poème chorégraphique. He described it as “a kind of apotheosis of the Viennese waltz, linked in my mind with the impression of a fantastic whirl of destiny.” In the score, he illustrated the scene:

Through whirling clouds, waltzing couples may be faintly distinguished. The clouds gradually scatter: one sees at letter A an immense hall peopled with a whirling crowd. The scene is gradually illuminated. The light of the chandeliers bursts forth at the fortissimo letter B set in an imperial court, about 1855.

Glazunov’s Violin Concerto in A Minor, Op. 82, is the most conservative work on the program. Composed in 1904 for the Hungarian violinist Leopold Auer (faculty 1926-30), the piece premiered in St. Petersburg in 1905. A student of—you guessed it—Rimsky-Korsakov, Glazunov became a pioneer of a Russian aesthetic that combined principles of both the Mighty Five, the nationalist school of composers, and those who leaned more toward the European mainstream, such as Tchaikovsky. The Violin Concerto is a serious work that’s weighed down by aching Russian melodies. But much of its structure, especially in the third movement, was progressive for its time.

The program ends with Ravel’s triumphant arrangement of Modest Mussorgsky’s Pictures at an Exhibition. Originally written for piano, the piece pays tribute to an exhibit of drawings and paintings by Victor Hartmann, a revered artist and close friend of the composer. It wasn’t until Mussorgsky had died that Rimsky-Korsakov found and edited the manuscript, bringing the piece to light and inspiring a miraculous stream of orchestrations by dozens of composers. Ravel was commissioned to write his own orchestration in 1922 by Serge Koussevitzky, the recently appointed music director of the Boston Symphony Orchestra (and a Juilliard guest conductor a quarter century later). A key moment in the piece comes in the second movement, when Ravel uses an alto saxophone to portray a troubadour performing beside the Old Castle. In the early 1900s, as Ravel was becoming acquainted with its noble, vibrant sound, the saxophone was beginning to carve a place for itself among the established orchestral instruments. Composers like Prokofiev, Milhaud, Rachmaninoff, and Kodály were using the orchestra in unprecedented ways, and the saxophone provided a dynamic palette of sonorities for them to explore; Glazunov wrote a concerto for the instrument.

And so, at the end of the performance, if you are able to discern Rimsky-Korsakov subtly working his influence into each piece, be sure to present him an especially rousing applause. You may not see him, but if you listen closely, there he will be.