When he gives his debut recital at Carnegie Hall on November 13, Balazs Rumy (Artist Diploma ’12, clarinet) will embrace his past as part of this springboard to the future. Born and raised in Hungary, he’ll play 20th-century Eastern European music by Bartok, Juraj Filas, Gyorgy Orban, Leo Weiner, Martinu, Lutosławski, and Rezso Kokai, all of which was inspired by folk songs. Rumy’s road to Carnegie Hall was, of course, paved with “practice, practice, practice.” But there was also a twist of fate or two involved along the way, as he told first-year clarinetist Zachary Hann in a recent phone interview from his home in Budapest. 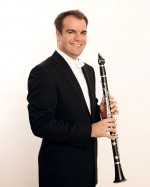 The recital will take place due to the generosity of an artist manager named Leo Ruiz who presented many artists at Carnegie in his lifetime; his bequest set the wheels in motion for establishing a debut recital for up-and-coming Juilliard Artist Diploma students and alums.

Let’s start with your background—was your family musical?
There are no musicians in my family so I don’t know where this interest came from. I started playing the piano, and I remember I saw a clarinetist on TV and I liked him very much. I told my mother, “Mom, I want to play that instrument.” So I went to music school and started playing clarinet. It was really something nobody expected.

Why did you end up leaving Europe and coming to the U.S. to study?
It’s a funny story. I didn’t want to go to the United States, but then I met a girl and she wanted to study in New York. So I went with her and told myself, “Why don’t I do something if I’m in New York?” I had met Charles Neidich previously—I did a master class with him in Weimar, Germany, and liked him very much—so I said, “I want to study with this guy.” I did the audition for Juilliard and got into his class.

Why did you choose Eastern European folk song-inspired music as the subject of your recital?
I wanted to do something I know more [about] than someone else would. I come from an Eastern European country and all of our music education is based on folk music and folk songs—[especially] Bartok and Kodaly. It’s really part of our everyday lives. When I’ve played these pieces, I’ve always felt some kind of special connection to them. Half of it is Hungarian music, and the others are from the region—Weinberg is from Poland, Martinu from the Czech Republic, and Filas is Slovakian. It’s something I feel more of a connection to than with American or German music. It’s like speaking your own language.

What’s been one of the most rewarding experiences so far in your musical life?
That’s a tough question. When you play, it’s always rewarding when you see the audience getting involved. Once I played a concert in Switzerland and I remember somebody in the audience started crying during a slow passage in some sad music. It’s really rewarding when they’re not just sitting like nothing is happening.

What you most looking forward to about this concert?
First of all, Carnegie Hall is a kind of sanctuary for musicians. I’m really happy that I’ve won this opportunity. It’s also a very long and hard program, so that’s special for me. This is probably the most demanding concert in my life so far, and the longest solo concert. Also, the Orban is quite a new piece, and I’m learning it especially for this occasion. I’m very excited.

Do you have any advice for up-and-coming clarinetists (or musicians in general)?
Don’t just practice the clarinet! There are so many other areas of music everyone should know. For example, listen to other instrumentalists’ recordings. I listen to a lot of Glenn Gould and a lot of Bach. This is an experience you don’t get on the clarinet. Go to concerts. Try to know other fields of art—not only music, but also sculpture, paintings. Also, people from your generation are really always very interesting. Coordinate and collaborate with other artists, not only other musicians. Everything you do is going to enrich your life as an artist. Your instrument is just one thing, but it’s not all. I think that’s the most important thing.