The Alchemy of Sound Crumb’s American Songbooks are each dedicated to a time of day. The score of Time Is a Drifting River: A Psalm for Daybreak and Morning (2003) shows eight phrases or musical rays around the central sun. Reprinted with kind permission of Edition Peters.

I have always considered music to be a very strange substance, a substance endowed with magical properties. Music is tangible, almost palpable, and yet unreal, illusive. Music is analyzable only on the most mechanistic level; the important elements—the spiritual impulse, the psychological curve, the metaphysical implications—are understandable only in terms of the music itself. I feel intuitively that music must have been the primeval cell from which language, science, and religion originated.—George Crumb 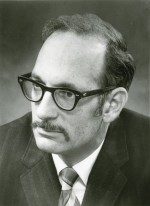 Above all, George Crumb writes music that is singular: unique, powerful, and immediately identifiable. The primacy of timbre, the searing emotional power, the extremes of dynamics and colors and moods, and the fierce intensity make it stand apart from all other music. For percussionists the world over, Crumb’s music holds a very special, hallowed place. There is no other composer, living or not, with his encyclopedic knowledge of our instruments and their expressive capabilities.

After a lifetime of extraordinary percussion writing, and a relatively long break from composing, Crumb, who turned 85 in October, embarked in the early 2000s on his American Songbooks project. It began as a set of Appalachian songs in response to a request for folk song settings from his daughter Ann, an actress and singer who has worked extensively on Broadway and London’s West End. Although the folk songs, hymns, and spirituals set in the American Songbooks series may seem far afield stylistically for Crumb, it is important to keep in mind his background and musical upbringing: he grew up in West Virginia, surrounded by the sounds of hymns and folk music, and, like Charles Ives, his father was a bandmaster. Unlike Ives, he doesn’t fragment the songs or weave them into his own work, but sets them largely intact, coloring them with subtle harmonic, rhythmic, and timbral variation. Over the past 15 years, the American Songbooks have grown to seven volumes, comprising five hours of music. They are not only Crumb’s most extended work, but also the largest song cycle in the history of Western music.

On April 13, the Juilliard Percussion Ensemble with master’s singers Caitlin Redding and Tiffany Townsend will present two of these monumental settings, The River of Life and The Winds of Destiny. Both are scored for voice, amplified piano, and percussion quartet. More than 100 percussion instruments will be used, including aboriginal thunder sticks, Cambodian anklung, Indian ankle bells, Jew’s harp, Moroccan bendir, African udu, bosun’s whistle, musical saw, crystal goblets, kabuki blocks, and toy piano. There’s also an amplified piano that’s used as a percussion instrument: struck, strummed, and plucked in any number of unconventional ways. Songs contained in these settings include “When Johnny Comes Marching Home,” “Shenandoah,” “Amazing Grace,” and “Deep River.” The settings are by turns funny, sad, sentimental, and terrifying.