Racette and Finley Master Class to be Streamed at live.juilliard.edu

The chance to work with stars is one of the innumerable benefits of being a Juilliard student—dozens of master classes are held each year. While few are open to the public, of course you have to be here to enjoy them. But there are also several master classes annually that anyone with an internet hookup can enjoy. On April 23 and May 7, Juilliard will host its final two live-streamed voice master classes of the year, viewable at live.juilliard.edu. In the first one, soprano Patricia Racette will take a break from singing Nedda in the Metropolitan Opera’s new production of Leoncavallo’s Pagliacci, which is paired with Cavalleria Rusticana. Baritone Gerald Finley will lead the second class; he’ll be in between performances of the Met’s production of Stravinsky’s Rake’s Progress, in which he sings the role of Nick Shadow. 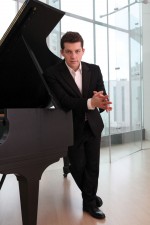 Juilliard’s Graduate String Quartet in Residence, the Aeolus, winds up its second year on May 4. At the 22nd Lisa Arnhold Memorial Concert, in Alice Tully Hall, the ensemble will present a program called Death and Transfiguration. It will start out with Schubert’s “Death and the Maiden” quartet, and end with Schoenberg’s Verklärte Nacht for sextet with faculty members Samuel Rhodes and Joel Krosnick. At the center of the concert is a world premiere, Douglas Boyce’s 20-minute Alcyone.

The piece draws its inspiration and structure from the tale of Alcyone and her husband, Ceyx, as recounted in Ovid’s Metamorphoses. After an irate Zeus killed Ceyx, the distraught Alcyone threw herself into the sea. The gods felt sorry for the doomed couple and transformed them into kingfishers, and each year, Alcyone’s father, Aeolus (the god of the winds and the quartet’s namesake), stills the winds during the birds’ mating season. Nicholas Tavani, the ensemble’s first violinist, described how the piece will be performed. “Members of the quartet will move on and off the stage throughout the work, setting an array of dramatic and sonic tableaux that will not simply be a retelling of the narrative, but rather an articulation of the communicative situations that present themselves in the myth; lovers separated, spectral visitation, the reuniting and transformation of self, and the inescapable distances of memory and time,” he said. The other members of the quartet are violinist Rachel Shapiro, violist Gregory Luce, and cellist Alan Richardson.

Henry Kramer, this year’s Petschek Piano Recital Award winner, was multitasking when he came up with the program for his concert, on May 6. Kramer will be playing works by Liszt, Aaron Jay Kernis, Ravel, and Chopin, and we asked him if his work on his D.M.A. at Yale influenced his program choices. The answer was yes. “I recently recorded Liszt’s Oratorio Transcriptions for Naxos and wrote my thesis about Liszt as a transcriber, focusing on those pieces as the source of my analysis,” he emailed The Journal. “I felt that Ravel (Gaspard de la Nuit) was a natural choice to follow Liszt’s Drei Stücke aus der heilige Elisabeth, S. 498b, because both composers approach the piano with orchestral sonorities in mind. The short Kernis piece, Morningsong and Mist (Aubade sous brume), functions as a prelude to the Ravel. The second half of the program features Chopin’s 24 Preludes. I see a connection between Ravel and Chopin in musical content. Although Chopin did not indicate an extra-musical inspiration for his Preludes, to me these pieces seem to be in a dreamlike state. Some are anxiety-ridden nightmares, which I see as related to the musical content of the Ravel.”