Juilliard at West Point in the '40s 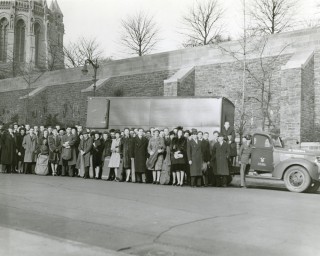 During World War II, Juilliard musicians made several trips to perform at the U.S. Military Academy at West Point. In 1941 (program is pictured), Albert Stoessel (faculty 1920-43) conducted soloists Janet Burt (’41, voice), Dorothy DeLay (’42, violin; faculty 1948-2002), and Janina Gorecka (’41, violin). The following year, the Graduate School Orchestra was invited to return to the academy, where members went on a tour, attended an organ recital, and presented a concert sponsored by the United States Military Academy Band. (They’re shown in New York City and at West Point.) The program at the 1942 concert included Beethoven’s Leonore Overture No. 3, Symphony No. 1 by Robert Ward (’46, orchestral conducting and composition; faculty 1946-55), Bach’s Prelude and Fugue in G Minor transcribed by Stoessel, Rimsky-Korsakov’s Capriccio espagnol, and a selection of songs performed by soprano Susanne Fisher (’41, voice) of the Metropolitan Opera. For other World War II coverage, click here.

Juilliard musicians board a bus in New York City to play at West Point in 1942. 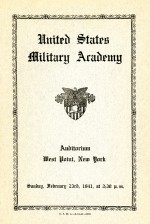 Dispatches From the Fronts

Readers, if you took part in either of these concerts—or other ones at military academies over the years—we’d like to hear about it! Please contact us at (212)799-5000, ext. 340 or journal@juilliard.edu.