What do Laura Linney, Joan Warren, Nicholas McGegan, Sunday Jackson, and Haruka Fujii have in common? They’re all the subjects of Juilliard Snapshot, a new series of 60-second video vignettes of community members’ anecdotes, advice, and more. Check them out at juilliard.edu/snapshot or on our YouTube channel. 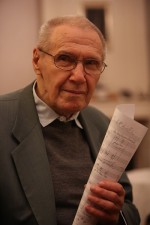 An informal farewell to Juilliard’s longtime vice president and chief operating officer, Jon Rosenhein, at the annual schoolwide staff meeting on September 30 turned into a more formal ceremony when President Joseph W. Polisi presented Rosenhein with the President’s Medal. In his citation, Polisi recognized Rosenhein’s “stabilizing presence and wise counsel” in the aftermath of 9/11, during the economic downturn of 2008, and other challenging as well as positive moments over the last 15 years. Rosenhein’s other responsibilities at Juilliard included oversight of the Juilliard Store, the Piano Maintenance, Information Technology, and Production departments, food services, and supervision of the school’s complex building renovation project, which was completed in 2009. The departing C.O.O. expressed appreciation to the Juilliard community, noting that “this group has delivered year in and year out.” He also extended an invitation to keep in touch by email—though, he remarked with a wry grin, complaints and budget requests should be directed to Christine Todd, who is now Juilliard’s vice president and chief financial officer.—Joshua Simka, Editorial Assistant

N.J.E. Gives Kurtág and Other Premieres

On November 17, the New Juilliard Ensemble presents five premieres, among which is the first American performance of Brefs messages (2011), by the Hungarian master György Kurtág; I was amazed to find a four-year-old piece by such a famous composer that had never been done in this country. N.J.E. will also give the world premiere of New Yorker Elliott Sharp’s 2015 Wannsee Noir, which he was completing just when I asked him what was new in his hyper-vigorous style. It will nicely counterbalance the introspection of both Kurtág and British composer Michael Zev Gordon’s 2014 Sehnsucht (often translated as yearning). My pile of submitted scores happily included a major vocal cycle by Philadelphian James Primosch called From a Book of Hours (2001/2006); the soloist will be soprano Alexandra Razskazoff, a second-year master’s student. Like Primosch’s piece, Du Yun’s Quatrain (2014) will have its New York premiere at the concert. Given Yun’s prominence in New York’s new-music world, I was surprised to learn that it had not been performed here. But a previous performance would not have mattered; while premieres are nice, the main criterion is quality. Unfortunately, it is all too easy to find high-quality music that still needs a world, national, or local debut. For more about the concert, see the Calendar on Page 18 or visit events.juilliard.edu.—Joel Sachs, Founder and Director of N.J.E.

Nine Juilliard pianists will soon step into Mozart’s shoes: They will conduct several of his piano concertos (performed here by members of the Juilliard Orchestra) from the keyboard in PianoScope events at Juilliard (November 5) and the Morgan Library (November 6). Both will be hosted by pianist, Mozart scholar, and Juilliard visiting faculty member Robert Levin. PianoScope takes place each semester; each one is based around a theme or composer within the piano literature. These performances are the culmination of a monthlong study of the historical background and performance practice of Mozart’s Piano Concertos Nos. 9 in E flat, 12 in A, and 14 in E flat. How did Mozart organize and lead these works? What were the venues in which he performed them like? How big was the orchestra? Who was in the audience, and what were they listening for? Mozart had to compose the music, rent the performance space, engage the players, convince the audience to attend, and, finally, captivate listeners. “My three subscription concerts brought me great honor,” he wrote to his father in 1784. “To tell the truth, I grew tired of all the playing—but it gives me no small credit that my audience never grew tired of it.” See the Calendar on Page 18 or events.juilliard.edu for details.—Aaron Wunsch (MM ’03, DMA ’08, piano), Music History and Graduate Studies Faculties

This season’s opening doctoral forum was given by Harvard University professor Kate van Orden, ­who discussed Early Music and ’60s Counterculture. The centerpiece of her September 22 talk in Morse Hall was the rise of early-music pioneers, particularly Viennese cellist-conductor Nikolaus Harnoncourt, whose style morphed as he moved from the quintessentially mainstream style of the Vienna Philharmonic to a more flexible early-music style that would eventually evolve from cultish outsider status to mainstream acceptance. Van Orden also focused on Harnoncourt’s fellow early-music pioneers in the Dutch school of Baroque performance practice in the 1960s, especially Gustav Leonhardt and Frans Brüggen. Excerpts from Couperin and Vivaldi recordings demonstrated the advantages of a looser, more conversational performance culture. Van Orden, a bassoonist, also regaled the large crowd with tales of her own musical journey, which had some parallels to Harnoncourt’s three decades earlier. As a student at the University of Iowa, she’d been intrigued by the unpretentious performance style of the Netherlands Wind Ensemble when it performed there, abjuring its giant concert hall and playing in its lobby. The ensemble’s albums also appealed to her, among them the decidedly unconventional Greatest Hits, with its cover photo showcasing Dutch oboe hunks. Not long after the Iowa performance, Van Orden sent an ensemble member an audition tape and was soon doing graduate work in Holland. While there, she found that the Dutch school of Baroque performance had many of the same loose, improvisatory characteristics that had intrigued her in the Netherlands Wind Ensemble, and she was soon adding Baroque bassoon to her arsenal. Van Orden’s engaging, informal presentation style was a welcome echo of the performance philosophy she champions.—Elliott Hurwitt, Program Editor