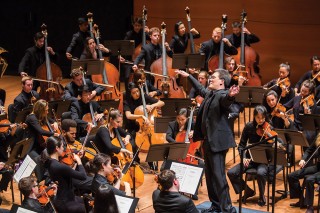 Alan Gilbert will lead the Juilliard Orchestra for his Ring cycle compilation, A Ring Synthesis, along with works by Schumann and Berg, on November 24.

It was, Alan Gilbert says, kind of a terrifying moment. Gilbert, then a Juilliard master’s student, now the music director of the New York Philharmonic and head of Juilliard’s orchestral and conducting programs, had petitioned the registrar for permission to take Jim Kurtz’s Wagner class a second time. And then he had to meet with President Joseph W. Polisi to convince him that was a good idea. Two decades later, recounting the anecdote, Gilbert (Pre-College ’85; MM ’94, orchestral conducting) says, “It’s amusing to think back to that— I was terrified because it was so unusual to repeat a class. I explained [to Polisi] that I thought it was a bottomless pit to study Wagner’s music, and that I would do different papers,” he told The Journal. “I was such a fanatic about Wagner at the time; it sort of took over my life.”

It all worked out, of course. Gilbert took the class again, describing it as the one he worked hardest on at Juilliard—both times. And he’s gone on to an illustrious career in which the deep knowledge of Wagner polished at Juilliard has served him extremely well.

Now he’s bringing it back. On November 24, he’ll conduct the Juilliard Orchestra in its annual Carnegie Hall concert in his Ring cycle compilation, A Ring Synthesis. The choice of repertoire is a little unusual. “Wagner doesn’t come around that often in school,” Gilbert said. “The investment of time and energy required means it’s not an obvious choice when choosing repertoire for a student orchestra, even a wonderful student orchestra. The Beethovens and Brahmses and Schumanns tend to come around first. But this is obviously music that’s worth doing and educationally; very fertile.”

One of the biggest reasons orchestras don’t perform as much Wagner is that it’s mostly opera music, which is one reason Gilbert put together A Ring Synthesis. His version, inspired in part by one he had heard Erich Leinsdorf do many years ago, starts with Act III of Die Walküre—the iconic “Ride of the Valkyrie”—and proceeds chronologically to the end.

“There’s great music in Rheingold and the first two acts of Die Walküre,” Gilbert explained about why he started where he did. “But the ‘Ride’ is so iconic, it launches you into the world of Wagner in a way that’s more than easily graspable to pretty much everybody.” The suite touches on a lot of the same highlights that make it into most orchestral Ring compilations but also includes a number that don’t. “Especially in Götterdämmerung there are sections of the music that are absolutely worth hearing in a concert hall but tend not to be there, so I put this thing together.” While it took a lot of time and effort to create the compilation, he noted that, with just one exception, “there are no transpositions and there are only slight orchestration changes to make the links work well.”

Wagner’s music is, of course, the pinnacle of Romanticism, and when it’s played in concert, Gilbert said, it’s often programmed with “gentle pieces.” He’s taken the opposite tack here, pairing it with Schumann’s Manfred Overture and Berg’s Three Pieces for Orchestra. The Manfred Overture, which is based on Byron’s poetry, “is pretty much the height of 19th-century Romanticism. And Berg’s Three Pieces, which I think is an incredibly important work, is about as far as you can go post-Romantic before music devolved into a totally different thing with Schoenberg. It’s like where Strauss and Mahler and Wagner probably would have ended up if they’d gone to the logical—or illogical—end of the Romantic movement,” Gilbert said. “The Wagner obviously is also in that vein but in a different voice.”

In the almost five years that he’s been the director of conducting and orchestral studies at Juilliard, Gilbert said that he’s tried to “go through different styles and types of music, so that students who follow through the concert experience with me have had a real variety by the time they graduate.”

This program will certainly be a culmination. “It’s going to be lot for the orchestra to contend with,” Gilbert said. “It’s extremely difficult, but I like challenging the orchestras here because you always get so much back and I think that the musicians at Juilliard are capable of so much. This is pushing them very hard and very far, but I hope it will be a strong experience. It’s one that I certainly expect to remember for a long time.”