Hearts, Minds, and Hands Give Back Several veterans of Juilliard outreach trips to New Orleans returned there in August at the time of the 10th anniversary of Hurricane Katrina. They're seen at the New Orleans Center for Creative Arts, a conservatory where Juilliard groups have taught many workshops over the years. From left: dancer Chelsea Ainsworth; actor Dylan Moore; NOCCA's director of communications and campus activity, Brian Hammell; and bassist Alli Job.

It's August 2015, and I'm about to take off for my third trip to New Orleans, on the occasion of the 10th anniversary of Hurricane Katrina. My mind races back to past trips with students who've elected to spend their Juilliard spring break rebuilding a bruised and broken city. On every occasion there was palpable excitement for giving back to a city that beats and breathes with art. 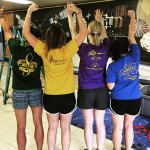 Four years' worth of Juilliard in New Orleans T-shirts.

When I arrived at Juilliard in 2005, the school was buzzing with an awareness that the world outside not only existed (which can be easy to forget at the Yard) but was also in desperate need of what artists offer. This notion was crystallized in ARTReach, a student group that had been formed after the September 11, 2001, attacks, when students had started asking each other, “What do we do? What can we do?” The answer they found: Give our hands, our hearts, our art.

On August 29, 2005, my second day at Juilliard, Hurricane Katrina made landfall in New Orleans. TVs and newspapers were covered in images of people on roofs, with boats floating next to street lights, and what looked like the end of a city that unabashedly promoted the artist. New Orleans native Caroline Fermin (BFA '07, dance) called a meeting in Room 304 and those of us who attended began to plan how to give back.

At Juilliard, I became a part of a community rooted in the beautiful connective tissue of outreach, which gave me pride in my personal narrative. Previously, I had “just” been an actress. Through service, social justice, and advocacy, however, I found my art and my womanhood, and my classmates and I went from being “just” actors, dancers, and musicians to banding together to make the world a better place.

I was thinking about this as my plane landed in August, on the 10th anniversary of Katrina. Joining me were Alli Job (Pre-College '05; BM '09, MM '11, double bass), Chelsea Ainsworth (BFA '10, dance), and Midori Sampson (BM '14, bassoon). During our three days in New Orleans, we relied on the tools we'd each learned to use at Juilliard: our hands to revitalize a school, our hearts to reconnect with people and places, and our art by performing for a group of veteran volunteers. That trinity is potent; it revitalizes and empowers. However, unless you've experienced it, how would you know the ways it deepens and strengthens your art?

The culture of outreach was particularly strong during the 2000s because of a perfect storm of geopolitical events that are framed by 9/11, Hurricane Katrina, and the economic collapse that took place during my last year at Juilliard, 2008-09. In the aftermath, we witnessed the effects of two wars, inflated corporate greed, and rampant structural racism. As our world shifted, we inspired and provoked one another through the rise of social media. We demanded change, knowing there was more than “this”— that our privilege is also our responsibility. Yet, with the mounting complexities of the world and the tidal wave of information we receive every day, now we sometimes feel like we've become paralyzed. I worry that the culture of outreach is slowing down.

In President Joseph W. Polisi's powerful set of essays and speeches, The Artist as Citizen, he wrote, “there should be no dividing line between artistic excellence and social consciousness.” As artists, he wrote, we're not only allowed to—but should—strive toward developing our and. We are artists and citizens. And it is through the and that we can empower ourselves to activate our art, strengthen our communities, and be the change we want to see.

Three years ago, while searching for a way to stave off the information-overload paralysis, some of my Juilliard friends—fellow volunteers for ASTEP (short for Artists Striving to End Poverty, a nonprofit that partially grew out of ARTReach)—and I decided to create a conference that would go after that very idea of the and. The result, the weeklong Artist as Citizen Conference, will take place at Juilliard for the third time this June, and will give college- age creatives the tools to develop their and in order to make a difference in their communities. We aim to apply the same rigorous and detailed approach we use in creating art in cultivating practices to impact the world.

Fellow alums and current students: apply for the conference! We must be responsible to the world if we want the world to value our work. Join us to discover—or continue to develop—your and. Of course we need time for the beautiful purity of hours alone in a practice room, but they must be held in relation to the world outside Juilliard, one that is bruised and broken, political and corporate, and in need of the sort of far-reaching visions that artists have.

The world needs you—it needs the soothing and forceful hands, minds, and hearts of the artist. We need each other.

Applications for the Artist as Citizen Conference are due March 31; for information, go to artistascitizen.com or asteponline.org.

Painting in the Key of Color: The Art of Nicholas Roerich
Focus on Art
Who’s in This Mystery Photo?
Missing in Caption