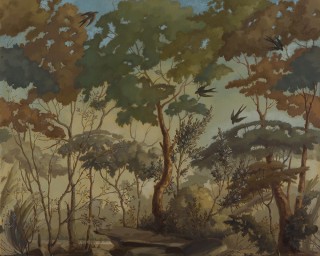 This month, Juilliard Opera presents Francesco Cavalli's La Calisto, “one of the supreme masterpieces of the 17th century,” according to Stephen Stubbs, who'll conduct the singers and Juilliard415, the student period-instrument ensemble, in this production. The opera is appealing for its great dramatic value, he told The Journal, but also because the pared-down instrumental forces demanded by a Baroque opera suit the intimacy of the Willson Theater, which has a maximum seating capacity of 98 people.

While Stubbs had worked on scenes from Calisto in workshops over the years, this will be his first time conducting the entire opera. “I knew it was full of gorgeous music and hilarious comedy—but only now that I have studied the whole piece do I know that it is by far and away the sexiest masterpiece of the 17th century.”

Zack Winokur (BFA '12, dance), the production's director, knew Calisto very well coming in—he choreographed the Cincinnati Opera's July 2014 production. “Opera should look a lot more like dancing and dancing should look a lot more like opera,” Winokur told The Journal. For the 2014-15 season, he was the fourth Marcus Institute for Vocal Arts opera directing fellow, and for this fall's Juilliard Opera double bill, he co- directed Der Kaiser von Atlantis and was the associate director for Les mamelles de Tirésias; he also choreographed both shows. If the path from dance to opera seems roundabout, Winokur notes that the overlap between the two forms goes back to opera's conception as a genre, in the late 16th and 17th centuries, and dance's integral role in its development.

La Calisto was first performed in 1651, a unique period for opera in European history. The use of female characters on stage in Venice—though not in Rome or England at the time—led to cross-cast and cross-dressed roles. Opera had until that point been reserved for the aristocracy, but in Venice, it was enjoyed by the masses. Giovanni Faustini wrote the libretto, which he based on the version of the myth of Callisto in Ovid's Metamorphosis. The opera features Giove (sung by baritone Xiaomeng Zhang) who is rebuffed by the naïve young nymph Calisto (soprano Angela Vallone)—an attendant to Diana (mezzo-soprano Samantha Hankey), the goddess of chastity, whom Calisto loves and admires with a romantic passion. With the help of his aide Mercurio (tenor Michael St. Peter), Giove turns himself into Diana, and Calisto falls for him. When the actual Diana appears, she holds Calisto in contempt for her presumptuousness. Giove is so pleased with all this that he immortalizes Calisto by turning her into a constellation, Ursa Minor. In Cavalli's lyric arias, rhythmic motives—often reminiscent of popular dances and songs at the time—push forward the graceful phrases, which are supported by simple harmony.

To update the opera for a modern audience, Stubbs and Winokur spent months cutting it from three acts to two and removing, for example, mythological references that would have been funny to a 17th-century audience but lost on a modern one. The production is not set in any particular time period and the costumes borrow from ancient Greek ideas of easy drapery, but also have a contemporary feel. The costume designer is Austin Scarlett, formerly of Project Runway and now the creative director of his own couture bridal collection (in an upcoming Journal you'll be able to see the journey of the Calisto costumes from concept to stage).

In addition to the singers and the Juilliard415 instrumentalists, the production will also feature four first- year dancers playing satyrs, nymphs, and furies. This sort of interdepartmental collaboration is near and dear to the hearts of both Winokur and Brian Zeger (MM '81, collaborative piano), the artistic director of the Marcus Institute. “My whole interest in coming to Juilliard as a student was in finding a way to do this kind of interdisciplinary work and now I've been invited to do that as a director,” said Winokur, who started tap dancing at age 12 and fell in love with the form after that. While he was studying at Juilliard, he put together interdisciplinary projects like stagings of chamber music as well as opera scenes involving just a singer and a dancer. “This is something I can do for the rest of my life,” Winokur recalls thinking when he happened upon the big idea of interdisciplinary work. And noting that lately Juilliard has been making this type of work an institutional priority, he said, “it's really satisfying for me to be part of the writing of that book.”