Some of this article comes from Donald Krishnaswami's program note for the premiere of his tone poem The Swordfishers by the Boston Landmarks Orchestra and a children's ensemble. 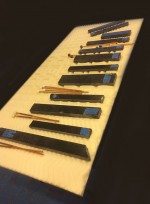 The lithophones pictured here were made for this concert from discarded stone kitchen countertops.

On a beautiful evening last summer on the banks of the Charles River, an ancient Native American civilization came back to life when The Swordfishers, my tone poem for lithophones, log drums, and orchestra, premiered.

I must admit that I scratched my head a bit when Christopher Wilkins, music director of the Boston Landmarks Orchestra, approached me 10 months earlier about writing a piece for lithophones. Turns out that the word basically means stone (litho) sound (phone), and the ones in question came from a civilization whose heartland lay around the Gulf of Maine and extended from Massachusetts through Labrador 4,000 to 9,000 years ago. Study of their skeletal remains shows that these people were ancestors of today's Native Americans, and the final phase of their civilization is associated with the Red Paint People, so-called because of the red ochre which they spread over their dead. Among the artifacts found at sites associated with these people and their cultural ancestors were longstone rods (picture gray French baguettes). At first it was thought that they were just pestles or sharpening stones, but closer examination made it clear that some of them had been sculpted for use as remarkably resonant musical instruments—lithophones. Discovered by renowned archaeologist Duncan Caldwell, these lithophones are the oldest known musical instruments in New England—and among the oldest in the Americas.

Although instruments made of such perishable materials as leather and wood haven't survived the millennia, the Red Paint People and their cultural ancestors at Amoskeag Falls and other sites around the Gulf of Maine almost certainly also played “slit” or “log” drums (essentially hollowed out logs with slits in the top). That being the case, I realized that it made sense to feature both lithophones and log drums in my work. While a number of actual ancient lithophones of the Red Paint People exist, they are far too delicate to be played today, so replicas were used instead, as were modern log drums.

When I started The Swordfishers, I thought its primary purpose would simply be to feature the lithophones and log drums. But as I began to write, what became clear was that, rather than being “about” the lithophones and log drums, this piece should be programmatic and tell the story of the Red Paint People themselves. So my goal became to transport listeners back in time to the archaeological period known as the Maritime Archaic, during which the cultural continuum that included the Red Paint People took place.

One of the most fascinating aspects of the Red Paint People, and the inspiration for the name of this work, was that since big game had largely disappeared with the end of the Ice Age, they hunted swordfish—big, well-armed, and surrounded by dangerous waters. This required courage, endurance, teamwork, specialized equipment, and a lot of preparation; it also let them solidify social bonds through initiations, rituals, and storytelling. For the Red Paint People, swordfish were probably as imbued with respect and symbolism as mammoths and whales have been at other points in history.

The piece begins with muted strings and tam-tam to set the atmosphere followed by murmurings of nature as the music builds to a driving eighth-note rhythm based around an A-minor chord that marks the appearance of the Red Paint People (represented throughout the work by the A-minor chord or the pitch A). The music intensifies into an aleatoric cadenza for lithophones and log drums. This ritual pre-hunt dance is played from a palette from which the solo percussionists choose rhythms on the spot or improvise.

The central focus, naturally, is the hunt. After an alto flute sets the stage, the lower strings move the scene to the ocean, and the English horn introduces a seafaring theme that's picked up by other winds. The journey through the sea continues with imagery of waves, water, and splashing paddles until there's a moment of stillness as the hunters wait. Suddenly, a swordfish jumps, falls back into the water, jumps again, and, with the force of a full-fortissimo chord, the fish is speared. A falling brass figure brings the fish down, and a fortissimo unison accentuated by temple blocks and timpani accomplishes the lashing of the great fish to the boat. The hunt is a success, and after the celebration, an epilogue brings back the driving eighth- note rhythm and the A-minor chord of the Red Paint People, now played more deliberately and with full force.