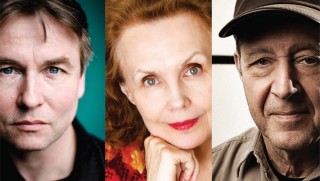 Could October be New Music Month at Juilliard? With Juilliard's two acclaimed ensembles dedicated to the music of the 20th and 21st centuries—the New Juilliard Ensemble (N.J.E.) and AXIOM—opening their seasons within days of each other, along with the Juilliard Orchestra's inspired programming of contemporary works, it's hard not to pay attention. When asked about contemporary music at Juilliard, Ara Guzelimian, provost and dean, noted that “composers and new music are in Juilliard's DNA, from the leadership years of William Schuman (president 1945-62) and Peter Mennin (faculty 1947-58, president 1962-83) to today. It's a vital part of any musician's life to be conversant with the music of the present day.”

Nature by British composer Tansy Davies, a concerto for piano and 10 players, will have its U.S. premiere at the N.J.E. concert on October 1. Andrew Ford's Contradance (2015) is on the bill at the October N.J.E. performance Guzelimian recalled that Steve Reich ('61, composition), whose 80th birthday will be celebrated in an AXIOM program on October 29, once recalled that one of the most meaningful experiences of his Juilliard student days was being introduced to the wonders of the Bartók string quartets by then-faculty member Vincent Persichetti (faculty 1947-87). “That sense of discovery plays out anew in every generation,” Guzelimian added. “It's essential that our students play new and recent music at the same high level of excellence that they bring to the older, well-established repertoire—and that they encounter and interact with composers as part of daily life at Juilliard.”

N.J.E., headed by founder and director Joel Sachs, spotlights the great variety of music being written today. Its opening concert, on October 1, features works by four composers who aren't yet well-known in the United States. Andrew Ford's Contradance had its first performance last year in his native Australia; the N.J.E. rendition will be the U.S. premiere. As its title suggests, the model for Contradance is the old English dance style. The strong contrabass and contrabassoon parts lend a double meaning the composer was unaware of while he was writing the piece, Ford told Sachs. American composer Scott Wheeler's 2006 chamber symphony, City of Shadows, might call to mind the soundtrack to one of the shadowy cityscapes of film noir. It's also on the program as is the American premiere of English composer Tansey Davies's Nature, a concerto for piano and 10 players featuring second-year master's composition student—and pianist—Andrew Hsu.

Rounding out the evening is the New York premiere of Uzbekistani composer Dimitri Yanov-Yanovsky's Hearing Solutions (2002). The story behind it is that Yanov-Yanovsky received a Siemens Artist Grant that set him up with an office in a New Jersey hearing aid factory, where he was charged with writing a piece that reflected his experience. Yanov-Yanovsky asked Sachs to conduct the premiere of the resulting concerto for cello with the New Juilliard Ensemble. “It's a terrific piece,” Sachs said. “In the beginning you can't tell what's going on but then as your hearing aid gets adjusted, it gets clearer and clearer.”

AXIOM's season of four concerts, all led by founding music director Jeffrey Milarsky (BM '88, MM '90, percussion), kicks off October 12 with the music of Finnish composers Esa-Pekka Salonen and Kaija Saariaho and Saariaho's mentee Portuguese composer Vasco Mendonça, whose inventive Fight/Flight/Freeze for electronics and ensemble had its world premiere in 2014. Saariaho's Light and Matter for violin, cello, and piano also premiered that year and was her first piano trio. In her program note, Saariaho wrote, “The starting point for the music is light kinetic energy, which is then developed into more dramatic gestures and rapid exchanges among the three instruments.” Salonen's Homunculus (2007) is a compact string quartet that “behaves like a big piece,” the composer wrote in his program note. “The title refers to an arcane theory that sperm is in fact a ‘little man' (homunculus) that was placed inside a woman for growth into a child. This seemed to them to neatly explain many of the mysteries of conception,” he added. “Despite the obvious weaknesses of the [theory], I find the idea of a perfect little man strangely moving.” Preceding the performances all three composers will take part in a panel discussion with Guzelimian.

On October 20, Milarsky leads the Juilliard Orchestra in Bartók's Viola Concerto with works by Salonen and John Adams. Salonen's Nyx (2011) revels in the sonic possibilities of a large orchestra; the composer set out “to write complex counterpoint for almost a hundred musicians playing tutti at full throttle without losing clarity of the different layers and lines.” Continuing the sonic challenge, the orchestra begins the celebration of Adams's 70th birthday (in February) with a reading of his Doctor Atomic Symphony (2007). A distillation of musical themes from his 2005 opera of the same name, the symphony is a white-knuckle ride that a New York Times reviewer wrote, “invites you to hear the music—driving passages with pounding timpani, quizzically restrained lyrical flights, bursts of skittish fanfares—on its own terms, apart from its dramatic context.”

AXIOM returns October 29 with a concert that showcases works from three periods of Steve Reich's compositional life. “I don't want to say they are period pieces because Reich is so current,” Milarsky told The Journal. “But whatever year he is writing somehow sounds like that year. He embraces exactly where we are. Here's a guy who is 80 years old and writing music with rap and hip-hop influences in the same piece.” Music for Mallet Instruments, Voice, and Organ (1973), which, Milarsky said, helped put Reich on the compositional map, opens the program. City Life (1995) uses digital samples of horns, alarms, brakes, and many other sounds associated with New York City and is classic Reich, Milarsky noted. Also on the bill is a version of Double Sextet (2007) using 12 live players—the Juilliard Percussion Ensemble led by faculty member Daniel Druckman (Pre-College '76; BM '80, percussion).

Just as when Reich was here, new music continues to have an important place at Juilliard. “The performances I've conducted at Juilliard of the [contemporary music] ‘classics' rival anything I've conducted with professional ensembles,” Milarsky said. “I've heard the same from the many composers who come to work with us—they're just bowled over. Our musicians prepare to the hilt, and in the real world you just can't do that. Ara has sort of created a Nirvana here where our students can really dive into the music and absorb it. When Juilliard students play these works, you know it just doesn't get better.”