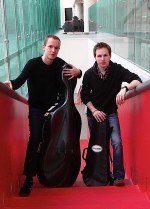 Last December, Avery Waite and I decided to give a small, joint recital for friends and family in our hometown, Charlottesville, Va. Further discussion led to the idea of donating the proceeds to a worthy cause. After hearing about violist Kim Kashkashian’s Music for Food Boston, a concert series that donates money to feed the poor, we decided to model our concert on this idea. Before we knew it, our original plan had snowballed into a much bigger project, as our main goal now was to get as many people as we could to attend and donate money. Our small recital became Music Feeds Us, a concert with a simple objective: performing classical music in exchange for donations to feed the hungry.

We partnered with the Blue Ridge Area Food Bank, which serves an average of 119,000 people each month across the Blue Ridge region. With the help of Juilliard’s Summer Grants Program and our Charlottesville primary underwriters, Ralph Rush at Davenport & Company and Darrell & King Investment Council, LLC, we were able to fund a venue, multiple avenues of publicity, and the many other costs that go into giving a concert. Our mothers, Claire Waite and Cordelia Gary, undertook the enormous task of producing the concert in Charlottesville, and it was through their efforts—and posters, flyers, TV and radio interviews, display ads, newspaper articles, and preconcert performances at Whole Foods—that we ended up with a larger-than-expected audience of between 350 and 400 people.

Music Feeds Us took place on June 10 at the First Presbyterian Church in Charlottesville. Avery performed Bartok’s Romanian Folk Dances, Schumann’s Three Pieces in Folk Style, Two Pieces for Cello and Piano by Frank Bridge, and Debussy’s Cello Sonata. I performed the Rebecca Clarke Sonata, the Penderecki Cadenza, and Six Songs for Viola and Piano (originally for voice). And we played Beethoven’s Eyeglasses Duet and his Trio Op. 11 with our pianist friend Solon Gordon, who is based in New York City.

Preparing for and performing this concert, was extremely rewarding. The experience of coming back after five years to play for a community that contributed greatly to my musical growth was gratifying, and it was such an honor to use music to feed the hungry. Our efforts raised $6,483 and 482 pounds of food for the Blue Ridge Area Food Bank, which is equivalent to 26,333 meals.

Due to the success of this concert, we hope to make Music Feeds Us a yearly event.