4 New Dances and How They Grew 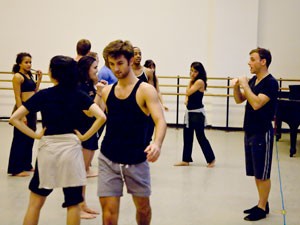 On Juilliard’s third floor, late on an autumn afternoon, four dance studios are humming with activity, each with a definite and distinctive atmosphere. Every single student from all four Dance Division classes is hard at work as New Dances/Edition 2008 is taking shape over two months of rehearsals. 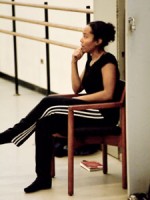 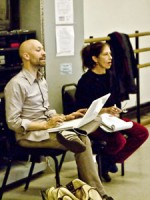 Choreographer Darrell Grand Moultrie watches the second-year dancers learn the moves for his new work, which will be premiered in December as part of New Dances/Edition 2008.

Four choreographers with very different backgrounds, choreographic approaches, and vocabularies—selected by Dance Division director Lawrence Rhodes—have been matched up with the four classes. At roughly the midway point of the rehearsal period, an exhilarating and mutually respectful give-and-take is evident in each studio. Larry Keigwin (whose 25 dancers represent one of the largest senior classes in the division’s recent history) has the room filled with contrasting and vigorous activity. Dancers pair up to stride along the perimeter of the studio to a pulsating beat, forming a continuous parade while sudden bursts of aggression and surprising contact create a vibrant counterpoint.

Right next door, the atmosphere is much quieter, almost hushed, as Johannes Wieland has turned off the folk-flavored accordion music to watch as his entire cast of 20 juniors pairs up for duets. Perched on the barre, he casts a meticulous eye and offers subdued suggestions about specific details as the dancers explore and negotiate their individual assignments.

In Darrell Grand Moultrie’s rehearsal, the sophomore class is working in groups of six in an atmosphere of intense efficiency. Moultrie is on one side, guiding his sextet through a lineup of staggered sudden falls, after which the dancers launch themselves forward on all fours. “Everybody find your way out of this,” he encourages them; soon after, they are standing and being urged to run “at the speed of light.” Meanwhile, another group of six is working with his assistant on a flowing floor sequence marked by yoga-like stretches and unfoldings. Everybody counts with precision and neither group seems the least bit distracted by the other—until the warp-speed running lands Moultrie’s group in the others’ midst.

Across the way, there is a sharp contrast to this crisp counting and space-consuming activity. Sidra Bell’s rehearsal, with the 23 freshmen, has the air of a meditative, private ritual. Dancers, all in socks that make for smooth, silent gliding, seem to occupy individual pods, as they move through distinctive, exploratory phrases. Bell and an assistant watch mostly in silence, strolling through the pockets of separate activity, offering a gentle comment or observation here and there. As she explains in a phone interview a few days later, “The way that I work is really collaborative. Early in the process, I give the dancers a lot of material that I’ve created, and they use that material to work on their own improvisations. I want to keep it a community process, with everybody working and involved.”

Each of these four new works (some of which were untitled as of this writing) represents an intriguing challenge on all sides. For the choreographers, there is the opportunity to create large-scale works. They are presented with a couple dozen highly skilled and motivated dancers, and no restrictions on their creativity. For the dancers, there is the challenge of absorbing a distinctive movement style and opening up to the specific creative approach of a choreographer.

For some of the choreographers, the project has enabled them to break out of their comfort zones and veer away from a standard modus operandi. Wieland remarks that “usually the music comes last for me; I make a piece and then try to find music that fits. This time, it was almost first.” Moultrie notes that his works in three sections usually “build to where the last section is explosive and exciting. For this piece, I wanted to go in the opposite direction. I wanted the piece to start off explosive and slowly become more subdued as it goes along. It ends with an adagio.” Keigwin, who usually creates to existing music, opted for a commissioned score.

Creating for such a large cast could be an intimidating prospect, but most of these four had at least some previous experience working with larger groups. Last year, Keigwin set 45 pedestrians in motion for a work to Ravel’s Boléro. Bell had worked with close to 20 dancers for a project at LaGuardia High School, but admits that a studio filled with 23 Juilliard dancers felt overwhelming initially—but not for long. “That first day, it seemed like there were so many people in the room. I wanted to give them a lot of information, and they were really excited; a lot was going on. As the process has gone on, every time I go in, it feels like fewer people. As we’ve gotten to know each other, they’ve become very distinct individuals.”

With an intriguing résumé that includes an undergraduate history degree from Yale and an M.F.A. in choreography from Purchase College Conservatory, Bell has been creating works for her own New York group of dancers since 2001. She often collaborated with her father, composer-producer-arranger-conductor Dennis Bell, on her early works, and more recently he has created scores for her works that were commissioned by Ailey II, Ballet Austin, and Sacramento Ballet. She wanted him to create the score for this project, since it offered the opportunity (increasingly rare these days) to have live musical accompaniment.

“I wanted to share the experience of doing something on this scale with him,” she explains. His score is for a jazz chamber ensemble of 10 players, including three percussionists. “We always talk, throughout the building of the music. What’s great about working with him is that he knows my taste very well. He’s able to key into the world that I like to create choreographically.”

Moultrie, a 2000 Juilliard graduate, required an organized plan of attack for this project, since, after he enthusiastically accepted the assignment, he was cast in the ensemble of the Broadway musical Billy Elliot. With scheduling tight, he maximized his use of time. “If I wake up in the middle of the night, I go through the video, write notes, listen to the music. When I do go in the studio, I have a little bit of exploration time, but I have to make sure I know my stuff.” He’s getting a lot of practice in being organized, with recent commissions from BalletMet Columbus, Atlanta Ballet, and Ailey II—several of them overlapping with his Billy Elliot rehearsal period. Moultrie’s work is set to the dynamic sounds of the Mexican guitar duo Rodrigo y Gabriela, who create percussion effects as well as melodic ones with their instruments.

Wieland—a German native with dance degrees from the University of Amsterdam and N.Y.U.’s Tisch School of the Arts, who performed with several companies, notably that of the late Maurice Béjart—regularly presents his choreography for a New York-based group, but is also artistic director of the dance company of Germany’s State Theater of Kassel. The music that inspired his Juilliard piece was a series of works on recordings by an accordion duet; the music will be performed live.

“I was haunted by the music. Then the piece evolved around the idea of letting go, and the instrument just had something very connected to that,” he says. His creative process involved discussion sessions in which he and the dancers explored aspects of “letting go.” “The dancers had creative input, and they were open to it. I find that the movement reads differently when the dancer really knows why and what they’re doing.”

Keigwin’s vibrant and often witty works have been turning up in many places, from the Martha Graham Company to Paradigm, and in Keigwin + Co’s performances at the Joyce Theater and City Center’s Fall for Dance festival. With a varied background that includes backup dancing for Downtown Julie Brown (a.k.a. Julie Dorne Brown) on Club MTV and a B.A. in dance from Hofstra University, he is brimming with ideas and an eager sense of fun.

His work for the class of 2009, Runaways, is set to a commissioned score by Jonathan Pratt. “I’ve never collaborated with a composer before, so it’s a wonderful creative exercise for me,” he notes. His title references both the runway concept that provides an ongoing motif for the dance, as well as the idea of running away. “With the large number of dancers, using the runway idea, I thought I could capitalize on the repetition in the music—setting up a loop. So maybe, with the way I’m looping them on and offstage, it will look like I have 50.” His very specific vision for the work includes “men in narrow ’60s suits and ladies in ’60s Chanel/Dior outfits” and what promises to be a striking stage design with no wings. “All the space will be open, so I’m developing space by light, as an arena where they’ll be dancing.”

Like his three counterparts, Keigwin overflows with praise for the Juilliard dancers. “The way I work is very collaborative, so I’m very happy they were creative and up for that. I was surprised by the facility of their creative minds, and their willingness.” As Moultrie puts it, “Juilliard dancers are so rare, because they can do everything. They’re classically trained, but they can get to the floor easily. They adapt quickly. It’s such a joy to be here.”