An Alumna Remembers Her Evening with Dalí
November 2011

Caitlin O’Heaney (formerly known as Kathleen Heaney) attended Juilliard as part of Drama Division Group 3 (1970-74) and embarked on an acting career that included stage, film (including roles in Woody Allen’s Purple Rose of Cairo and Zelig), and television work (most notably Tales From the Gold Monkey). But O’Heaney hasn’t confined herself to acting. A passionate environmentalist activist, she was a cook on the Greenpeace ship Solo in the early 1990s and, after returning to the U.S., ended up launching her own perfume (called Caitlin) after people admired a scent she’d created for herself. These days one of O’Heaney’s projects is performing a song she wrote, “Who Have We Freed?”, at antiwar and pro-environmentalist events, often with Pete Seeger accompanying her. O’Heaney was one of many former students who responded to a request for news about alums with nontraditional career paths. Here she relates a story about her short-lived interest in modeling. 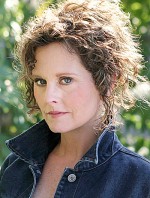 Soon after leaving Juilliard in 1974, I was offered the opportunity to meet with Salvador Dalí on a Friday evening at the St. Regis Hotel and audition to be one of his models. Initially, Salvador, his wife, Gala (who never stopped sending me jealous daggers from her narrowed eyes!), and I were seated in the ballroom along with a group of their friends. Salvador requested that a circle of chairs be arranged on the dance floor and that only the chandelier directly overhead be lit. Everyone chattered away in French (which, alas, I do not speak) for well over an hour, until Salvador, who was seated next to Gala and across the circle from me, motioned with one finger that I should get up and follow him.

He led me, in silence, to the elevator. We ascended, still in silence, to the penthouse floor. I must mention here that I was wearing a red dress and red high heels; he was in black trousers, black shoes, a black-and-white-striped suit jacket over a white shirt and a thin red bow tie. As we left the elevator he motioned again to follow him over to a small hall table over which hung an ornately framed mirror. He indicated that I should stand next to him and gaze upon our reflection. As I did so, he very proudly pointed at his red bow tie and said “Red!” and then pointed at my dress and said, “Red!” I nodded in agreement, which seemed to greatly please him.

He then motioned to me to follow him down the hall to a small studio filled with rolled canvases piled against the walls, cans of different colored paint, brushes, and one very small table covered with scraps of paper and tiny jars of paint. The rest of the room was filled by a medium-size circular table. Salvador indicated that I should remove my shoes, bra, and dress, but that I could keep on my pantyhose. He then told me to climb on top of the table and slowly turn so he could appraise my figure. I was happy that he kept repeating “Très bien, très bien!” A moment or two later, he told me to get down and get dressed. I had the job! Before we left the studio, he explained the nature of the job. He pointed to his thumb and said, “You,” and then covered his thumb in paint and rolled it back and forth on a piece of paper all the while repeating “You.” I understood that as his model I was also to be his brush—the images on the canvas were to be created by the rolling of my nude painted body against it. We decided on my salary and he told me to return Monday morning to start work.  We returned to the ballroom, where Gala ripped me apart with her eyes before we all said “Adieu.”

Alas, before Monday came, I was informed by a friend who was also a model for Dalí that Gala had nixed the entire project.