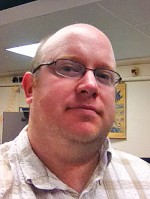 Born in Boston, Ben Johnson grew up in the Boston suburbs of Arlington, Cambridge, and Belmont before earning his bachelor’s degree in theater from the University of Massachusetts at Amherst. After graduating, he worked as a sound designer and engineer at the Foothills Theater in Worcester, Mass. When that closed, he moved to New York City and freelanced as an overhire electrician, which meant hanging lights, building sets, and setting up sound systems in theaters ranging from the tiny Cherry Lane Theater to Lincoln Center Theater.

How long have you worked at Juilliard, and what do you remember about your first day?
I have been working at Juilliard since September 13, 2001, which was also my first day as a freelance electrician. I can still remember being nervous about getting on the right train and being on time in such a large city, and also being in awe of the people who seemed to be unfazed about the recent attack in the city. Manhattan seemed like a very empty place at that time, which is so different from now; you could walk through Times Square and not bump into anybody. I was hired as the Juilliard staff electrician for the 2002-03 season, and then I was hired as the Drama Theater master electrician for the 2003-04 season.

What is the strangest or most memorable job you’ve ever had and what made it so?
I had a job as a sound engineer at a summer theater festival at Mount Holyoke College, and I had to run sound cables through windows and trees into a tent. It got really strange or crazy when it rained. The first week I arrived, all the interns that were hired for the summer had to dig a ditch for the power to run the lights. I ran the cable up and through tree branches and had an intern on watch during shows to make sure no squirrels or birds landed or chewed these cables. That was something I’ll never forget.

If out of the blue your boss said to take the day off, what would you do with your free time?
I would probably go across the street to see a movie and maybe head down to take the tram to Roosevelt Island; I’ve never done that and I have always wanted to.

Many Juilliard staff members are also artists. How do you balance your job and your artistic endeavors?
I am a musician at heart and play lead guitar in a band. It is very hard to balance this with work, so the band doesn’t play as much as I would like to, but it keeps my creativity going.

What other pursuits are you passionate about?
I love photography, and I have a great camera. I love taking pictures of architecture and nature—like the buildings that are visible above the treeline of Central Park.

What was the best vacation you’ve had and what made that trip so special?
The best vacation I have ever been on was my honeymoon, to Stockholm. It’s the best place on earth—the food, the buildings, the expansive islands, and the friendly people make it the ideal place to vacation. I have never had more fun in a foreign country than in Sweden.

What is your favorite thing about New York City?
The diversity of people, food, and cultures that you find here is unmatched. And the subway system here is incredible; you can go a far distance for $2.25.

What book are you reading right now and what CD are you listening to?
I am listening to Bon Iver’s new album called Bon Iver, and it’s really great. The songwriting is varied, the instrumentation is unique and the singing is heartfelt. It actually feels like a thought-out, fully realized album, and that is rarity in this age of digitally downloaded music. I am also reading Voices from Chernobyl, which is a sort of biography of people who were affected by the tragedy of the meltdown of Chernobyl, which isn’t for the faint of heart, that’s for sure. It’s very gritty.

What might people be surprised to know about you?
I own over 20 stringed instruments that vary from a Gibson Les Paul to a mandola, which is to a mandolin what a viola is to a violin. I am also a die-hard Yankees fan from Boston, a rarity.