Boredom Was Not His Style

For many people, Elliott Carter symbolized the intellectual composer of complex music. From our first encounter, in 1971, I was also fortunate to see another side of him. That year, Continuum’s season of retrospectives began with celebrations of Stravinsky and Hindemith, and would conclude with the first-ever all-Carter concert, for which Cheryl Seltzer and I had been spending months learning the solo parts of his newish and staggeringly difficult Double Concerto. When Carter appeared backstage after the Hindemith concert, I therefore expected a dauntingly intellectual comment. Instead, with an extremely sweet smile and a warm handshake he proclaimed, “Gee, that was swell!” A similar disarming moment occurred decades later at the preconcert interview we conducted during the 2008 Focus! festival. When he commented that people play his music too fast,  I remarked that for the finger-busting piano solo Caténaires, he gave the tempo as “minimum quarter note=96.” Did he not think it might prompt people to play it too quickly? He replied that the piece is boring if one hears all the notes. 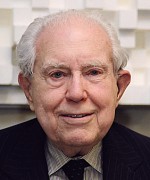 A Link to History
Gentle, Brilliant, Provocative
Following Your Artistic Vision
Secrets to Longevity
'It's Never Finished'
A Polyglot With Grit

Boredom was not his style, as I learned again later that evening. Although he had walked onto the stage for that interview rather than use his wheelchair, on the way off the stage I offered him my arm, knowing about a small gap behind the orchestra pit elevator. He declined, walking slowly but with no apparent problem. Later, when he was back in his wheelchair,  I asked, “Elliott, what’s with the wheelchair? Your walking seems fine.” He responded that he worried about falling, especially since a fall had brought about his wife’s death. He therefore had to walk very carefully, thinking about each step, “and that’s really boring!” Our last real conversation, it impressed me with his need to remain stimulated even at the end of his first century. And for him, boredom was best avoided by composing. As more and more new pieces emerged, I recalled that years before, when I broached the subject of a commission, he replied that a man in his late 80s should not accept commissions, because he could not predict how long he would last. But as we know, he was to bequeath the world dozens more small treasures before the end arrived.