Up in the Clouds: Kenro Izu's Photos of Bhutan

The great photographer Kenro Izu is renowned for his landscapes and still lifes. His luminous photos bring to life temples at Angkor in Cambodia, as well as monumental sites in Indonesia and India. In his current show, he has added a new dimension—that of portraiture—to his oeuvre. The exhibition, titled “Bhutan, the Sacred Within: Photographs by Kenro Izu,” will be at the Rubin Museum of Art only until February 18. I would advise you to hurry there and see it. 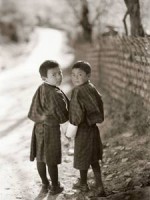 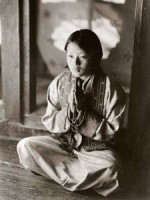 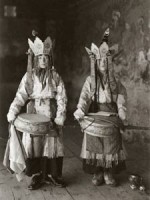 Izu traveled six times to the tiny Himalayan kingdom of Bhutan, drawn to it as much by the “gross national happiness” quotient (which the Bhutanese value above the more familiar economic G.N.P.) as by its magical setting in the clouds, perched upon cliffs.

One depiction of the landscape, a triptych, shows the temple of Taktsang, the most sacred temple in Bhutan. Situated high in the Himalayas, its name means “Tiger’s Nest.” In order to capture this fairytale temple/palace, Izu and his crew had to trek several hours into the mountains, carrying their heavy equipment. Izu took the picture at sunrise. He remained for three hours on the stairway set up for pilgrims, looking up at the temple “transfixed with tense excitement by the shifting light and mist” (as he writes in his travelogue for the project). The three parts were taken at different times, then placed together to give a wide-angle view. The string of prayer flags on the left, the right “panel” with clouds, and the temple itself in the center, remind me of Christian triptychs of a central Madonna and saints in “sacra conversazione,” with wings relating to the center. The resulting photograph effectively conveys at the same time the precariousness of the structure, the transitoriness of human existence, a notion of eternity, and what Izu calls the “sacredness of a sacred place.”

In deciding to attempt portraiture, Izu faced several problems. First, he was “shy of people,” as he has said, and found it difficult to point the camera at human subjects. But the second problem, a technical one, was even harder to overcome. His custom-built box camera, weighing more than 200 pounds, captures extra-fine details of light and shadow. But there could be no question of spontaneity with a camera this ponderous. Therefore it is all the more remarkable that Izu’s photos exude the impression of immediacy, when they are, in fact, all elaborately staged.

Upon entering the exhibition, the first photo that caught my eye was a large-format print of two young boys, stopping during their daily walk to school. In a seemingly candid shot, the photographer catches them as they abruptly turn their heads around to stare at him (and hence, us). Ironically, Izu explains that the photo is not candid at all; in order to take it, he followed them, asking that they repeat their walk later in the day, while he set up his camera in advance. Perhaps it is the incredible detail of their faces, the expression in their eyes, and the fineness of each strand of hair on their heads, contrasting with the blurred landscape behind them, that conveys the sensation of movement. The lighting also adds a spiritual dimension. The two centrally placed boys hold hands as they walk along. The brilliantly lit, spiraling and dizzying road ahead suggests an ascent into the unknown. Although Izu insists that his job is simply to document, his title for the show, “the sacred within,” is revealingly illustrated here. Like all great photos, this one succeeds because of its powerful integration of form and content.

A pair of extraordinary portraits shows a man wearing a mask and the same man holding the mask. Izu explained that he was one of a number of villagers taking a ceremonial role in the annual ritual called “Tsechu,” in which they honor holy men of the past. The contrast between the person inhabiting the gentle, wistfully smiling mask and the same old man, blind in one eye, holding the mask in his hands is striking; he is sad, poor, but proud and dignified. The two photos side by side made me think of the masks we all wear.

Another portrait that exemplifies Izu’s method of capturing the “spiritual within” shows a young nun sitting, holding her prayer beads. She was willing to be photographed, Izu says, but did not “have the slightest idea of what to do in front of a camera.” To solve the problem, he asked her to chant and pray until “her eyes drifted to something farther …” He used the same method, one that seemed natural to him, to take portraits of a young wife in prayer near a shrine; a young monk; other holy men and women; and even the young king of Bhutan, Jigme Khesar Namgyel Wangchuck.

One especially poignant portrait depicts a young father holding a baby in his arms, with his small son at his side; they stare out at us with sad and solemn expressions. They had just lost their wife/mother a week before, and had come to the monastery to send her spirit away. It is uncanny how even the baby’s eyes reveal this awareness. Izu says he realized that the family was “part of the sacred air of Cheri Gompa,” where the monastery is located. In all, it is the inhabitants of the land of Bhutan—the families, couples, holy people, and simple, everyday villagers—that constitute the “sacred within” of which the photographer so eloquently speaks.

Izu’s labor-intensive methodology and meditative process severely limited the number of pictures he could produce. He took no more than 12 pictures a day, or about 100 during any one visit. After careful editing, Izu selected his best works, developing each of the exposed 14-by-20-inch negatives by hand. Then he made contact prints by a complicated 19th-century method called the platinum/palladium print, known for extremely delicate and rich gradation from black to white.

Izu explains in an interview (which you can watch on computers next to the exhibit) that he began his career by photographing things under a microscope. This, in part, accounts for his attention to minute detail. But nothing can completely explain the overwhelming feeling of spirituality and well-being you take away with you after seeing the exhibition. “The Sacred Within” is contagious.

The Rubin Museum of Art is located at 150 West 17th Street, just east of Seventh Avenue.