The Future of Performing Arts Reimagined

For the students at Juilliard’s Music Technology Center, reimagining the world of the performing arts is part of a normal day’s work. Equipped with laptops and an Internet connection, they are redefining the role of the performing artist in the 21st century as they transcend the traditional boundaries of the concert experience. 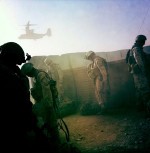 The final piece in Beyond the Machine, Base Track, incorporates (and was inspired by) photographs by digital artist Teru Kuwayama, who spent much of the last nine years embedded with the Marines in Afghanistan. The piece was adapted by alumni Roderick Hill and Michelle DiBucci, who’s also on the faculty.

The Beyond the Machine festival was founded in 2001 to provide students in all divisions with the opportunity to use technology in the creation and performance of new work and to cultivate collaborations between artists in different disciplines. The credo has always been “imagination first.”

With the centennial of John Cage as a point of departure, this year’s festival, Beyond the Machine: 12.1–Synchroneity, opens on March 29 with artists from Europe, Asia, and the Middle East remotely joining Juilliard students for four exciting multimedia performances.

The first work on the program is Cage’s iconoclastic Radio Music, reimagined and transcribed for Internet radios by Willie Fastenow, the Music Technology Center’s technical director. Cage’s score will be illuminated further to include the visual simultaneities that result from the performers “dialing” from one Web station to another.

Radio Music is followed by an installation/performance of Cage’s Third Construction, which features percussion quartets from the Guildhall School of Music and Drama in London, Kunitachi College of Music in Tokyo, and Juilliard. All 12 of the performers recorded and filmed their parts independently—but in synchroneity with a click track. The elements were then assembled into a video installation by filmmaker Pilar Haile Damato, a School of the Visual Arts alum. Her vision was to create an engaging installation that could also be used as part of a live performance. In this production, the films are interwoven with a single live percussionist performing elements of all four parts.

One of the most challenging acts of synchroneity in the evening is a performance of Cage’s Winter Music that has been scored for 1 to 20 pianos. With the generous support of the Yamaha Corporation, this production will feature three pianists located in Japan, California, and New York performing together live. This multicontinental event is made possible with dazzling new technology created by Yamaha for its Disklavier, an acoustic piano with sophisticated sensors that record every aspect of a performance including, pitch, dynamics, phrasing, and pedaling. The performance information can be stored on a hard drive and recalled for a later performance, making this an incredibly high-tech modern-day player piano. The true potential of this breakthrough technology can be best seen, however, when two Disklaviers are paired, so that one pianist could be in Japan performing on one instrument while the mechanisms of the twin, which could be all the way across the globe, move the keys and pedals.

In addition to the three works by Cage, B.T.M. will also present Zero Waste, which composer Nick Didkovsky wrote for MIDI piano and interactive technology and which does not require a score in the traditional sense. Instead, the pianist sight-reads a score created in real-time by a computer while the audience watches a projection of the notes the performer is reading. As the pianist plays, the computer processes the information, with all the nuances and inaccuracies of a live performance, and then displays a transcription of the last two measures the player performed. The pianist, in turn, reads the revised score and the computer, once again, provides its interpretation.Zero Waste is like the childhood game of telephone in which a story is transformed through repeated retelling.

This year’s edition of B.T.M. concludes with Base Track, which is scored for two actors, string quartet, projection design, and electronics. It’s an adaptation of a multimedia work of the same name by digital artist and journalist Teru Kuwayama, who spent the better part of the past nine years embedded with the First Battalion, Eighth Marines. His images, films, and interviews, along with those of other journalists, are assembled into an interactive, online environment that brings to life the stories and experiences of American soldiers in Afghanistan. Base Track was adapted for performance by drama alumnus Roderick Hill (Group 29) in collaboration with Juilliard faculty member Michelle DiBucci (M.M. ’87, composition), who is producing the music and sound design.

Beyond the Machine 8.0 Explores the 'Art of Groove'
The Future of Performing Arts Reimagined
Reimagining the Arts and Education