In these three exuberant hybrids, traditional music from China, the Caribbean, and South America merges with standard European classical forms—and the results are exhilarating. A prototypical example is composer Huang Ruo, a current Juilliard D.M.A. candidate, whose four-part Chamber Concerto Cycle boasts an eclectic style with unmistakable references to Chinese music. This recording (Naxos 8.559322)—the debut by the fast-rising International Contemporary Ensemble—shows a major compositional voice emerging. The demands on the musicians are legion, such as in the brutal opening to the Third Concerto (Divergence, from 2001) with its pounding piano and obsessive trills, or in the final movement of Yueh Fei (Concerto No. 1 for Eight Players, 2000), in which they quietly intone a chantlike figure against transparent textures. 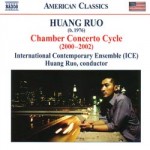 In The Lost Garden (Concerto No. 2 for Eight Players, 2001), the players plunge in with a raw yell while the instrumental portions hover in the air like hummingbirds. In 19 minutes, subtle rustlings collide with eerie whoops, typical of Huang’s bracing contrasts. And Confluence from 2002 (for 15 players) also opens with a burst of noise, followed by tidal waves of sound washing ashore with imaginative percussion effects. Careful with the volume control: engineers Charles Harbutt and Tom Knap have given Huang such a vivid recording that a cautionary note might be in order! (But a riveting realism is the payoff.) Throughout, Huang’s often whiplash stylistic turns seem to energize these musicians, who play with formidable confidence and intensity.

Considerably calmer but equally involving, Rapsodia Latina (Filarmonika 0102) shows cellist Jesús Castro-Balbi, who earned a D.M.A. at the School in 2004, and his wife, pianist Gloria Lin, who attended Juilliard Pre-College, collaborating on a seldom-heard array of primarily South American composers, although Seattle native William Bolcom makes a welcome appearance with “Gingando,” from his 1985 Capriccio for cello and piano. Seven of the pieces represented are world premiere recordings, including Manuel Ponce’s tender Lejos de tí. The mellow opener, Brazilian composer Marlos Nobre’s Poema III (2001), evokes Fauré, and is followed by the bluesy slinkiness of Manhattan Serenades (1995) by Gabriela Frank (U.S.-Peru).

From 1935 comes Venezuelan Joaquín Silva-Diaz’s nostalgic Serenata, and from 2002, Rapsodia Andina by Esteban Benzecry, an Argentinean composer who combines folk influences from his native country with contemporary cello techniques, with the piano often in tightly clustered chords. Also on the disc is his Toccata y Misterio (1991), a short exercise in darting rhythms, scarcely four minutes long. Mexican composer Luis Sandi’s Sonatina (1958) is a delightful surprise, as is Nobre’s Desafio II, from 1968. Castro-Balbi uses a persuasively light touch, in keeping with the program, and Lin matches him in delicacy, with passages tumbling over one another in playfulness. Adroit musicianship aside, the duo shows admirable scholarship in excavating this repertoire. The sound, from Ed Landreth Auditorium at Texas Christian University in Fort Worth, is slightly close but suits the intimacy of the collaboration.

Naxos continues to revive discontinued corners of the catalog, as heard in this disc (8.559263) of works by Roberto Sierra (originally on Musical Heritage Society) performed by the new-music ensemble Continuum. Born in Puerto Rico, Sierra names Ligeti and Nancarrow as favorite influences. Their stamp appears on the very first track, Vestigios rituales, an eight-minute romp for two pianists, here Cheryl Seltzer and Juilliard faculty member Joel Sachs, the group’s co-directors. Virginia Gutiérrez adds her lustrous soprano to Conjuros, a cycle of seven short songs based on chants originally from West Africa. The most recent work, Trio tropical (1991), offers sly tangos and jazz elements, fused with Sierra’s modernist leanings. Virtuoso clarinetist David Krakauer, who holds a master’s degree from Juilliard, makes the Cinco bocetos spring to life, and mezzo-soprano Ellen Lang is luminous in Glosa a la sombra (Commentary Upon the Shadow). The CD closes with Descarga (for piano and 10 instruments), which begins mysteriously, even a little innocently. But as the pulse increases and the superb Continuum players barrel through its almost quarter-hour, the meaning of the title becomes clear: “a discharge of enormous energy.”