Luthier René Morel, who worked on Juilliard string instruments from the 1950s until this past summer, died on November 16 after a long battle with cancer. He was 79, and his survivors include his brother, sister, daughter, sons, and longtime companion as well as numerous other beloved family members. Born in France, Morel came from a long line of violin makers dating back to the 18th century, and he began his own training when he was 12. He moved to the U.S. after serving in the French Air Force, eventually settling in New York City, where he first worked for top instrument dealer Rembert Wurlitzer. Over the years his reputation grew as he became the go-to luthier for the world’s best string players. (See below for an excerpt of a 1995 Live From Lincoln Center program on alum Yo-Yo Ma that focused on Morel.) Here, Eric Grossman (Certificate ’89, violin), curator of the Juilliard String Instrument Collection, remembers the legendary luthier. 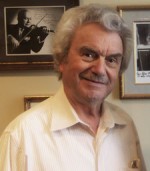 René Morel, who began his career as a luthier at the age of 12, most recently worked on the Juilliard String Instrument collection in June 2011.

(Photo by Courtesy of Eric Goodman)

René Morel had an extraordinary gift for adjusting string instruments for artists including Mischa Elman, Pablo Casals, Isaac Stern, Itzhak Perlman, Michael Rabin, Yo-Yo Ma, and Bernard Greenhouse to name a few. From all over the globe, his advice has been invaluable to those in search of the perfect adjustment, in which the instrument’s response is instantaneous and its over- and under-tones are aligned so that every note resonates and rings true.

Morel’s presence at the Juilliard String Instrument Collection spanned five decades, from his apprenticeship with Simone F. Sacconi at Wurlitzer’s through his 25-year partnership with Jacques Français to last summer. He adjusted a Juilliard violin at Tarisio Fine Instruments and Bows in June, after which we had lunch at a nearby French bistro that was a frequent haunt of his. As we dined, I asked him if he had ever documented the precise techniques he used in moving the sound post into optimum position for purity of tone. He smiled and replied “You know that Mischa Elman was once asked how he produced his noble grand tone—and did he ever yearn to play like his famous colleagues on the concert platform? His answer was simply, ‘One must have the sound clearly in mind, before you put the bow to the string you have to know what is going to come out, only then can one conjure up his soul through the violin. I would never want to sound or play like my colleagues. You must search for the truth from within.” Having said this, René continued, “I adjusted each instrument differently depending on the player and the individual sounds that they produced. I also listen carefully to their assessment of the tone of the instrument and how they felt while playing. Subtle changes of the sound post in my studio often translated to dramatic changes in the concert hall.”

I have brought more than 100 instruments to René Morel to set up, repair and restore since I begin working with the collection, in 1986. He frequently saw our finest instruments for sound post adjustments and routine seam gluing. René passed his groundbreaking restoration techniques to many young luthiers who worked alongside him, among them Stefan Valcuha.

René Morel’s love of great instruments and the musicians who played them will live on as a testament of his legacy. I will always remember him for the perfection of his art.