Making It Louder: The Secret to Successful Serious Music

Recently a former colleague of mine from the Metropolitan Opera Orchestra came to visit me and my wife, Annamae, a current member of the orchestra. Our friend had just returned from Tanglewood, where she heard the Boston Symphony Orchestra perform Bach’s Double Concerto for violin and oboe, featuring violinist Pinchas Zukerman and our former Met colleague oboist John Ferrillo. She thought the performance was beautifully played, thoughtfully phrased, and well-balanced between orchestra and soloists. But, she said, “something was missing. The music seemed distant, far away, not present.” I asked, “do you mean it wasn’t loud enough?” She paused and then said, “maybe it was the acoustics of the Tanglewood shed, but yes, the music could have been louder.” 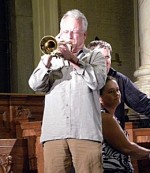 Making Some Noise About Loudness

Music not loud enough. It was not exactly a voilà moment. The elephant in the room was not acknowledged, but there was an awareness of a large creature lurking in the shadows.

There is an endless ongoing discussion about how to reinvigorate “serious” music and how to expand its audience beyond gay and gray. There’s thematic programming (Dvorak and his world); narrative programming (compositions played in a sequence to tell a story); colloquy to loosen serious music’s straight-back image; preconcert tutorials to inspire understanding and love of contemporary music; video projections of musical scores; creative staging, lighting, and seating; All-Star Orchestras; $40-million opera productions; singles nights at the symphony; etc.

Many of these ideas are familiar to those of us in the musical community, and many have been implemented with varying degrees of success. But the one idea I’ve rarely heard discussed is turning up the volume.

Everything in the world is louder now. Especially music. Ninety-nine percent of the world ingests music at high decibel levels. Loud music is the norm. We live in a headphone world: people walk around in their own movies with their personal soundtracks injected directly into their nervous systems. How often have you clearly heard music from someone’s headphones while sitting across from them on the subway? There are bands that specialize in low-frequency rumbles, akin to an earthquake, whose intent is to vibrate the body through the sheer physical power of sound.

Serious music in live performance has been slow to adjust to this profoundly different sound universe. But I think that for serious music to survive as a living, thriving part of the culture, it has to get louder, more present, more cinematic—and it must be delivered in a way that does not compromise or destroy its essence.

An August New York Times article (“Leaping at Electronic Prodigies,” by Ben Sisario) describes an event at the Red Rocks Amphitheater in Colorado, which holds 10,000 people. The sound/video system was designed by Meyer Sound specifically for this (outdoor) venue, with speakers built into the side of the mountain and more speakers suspended on a grid around the space, operating independently to create surround sound. The entire system can take live video and audio feeds from cameras in the amphitheater, as well as from the front-of-house console. The description of the sound system on Meyer Sound’s Web site reads like a description of the vehicle currently tooling around Mars. The system is state-of-the-art, projecting every sound with power, precision, and clarity. It’s finely tuned and expertly operated to transfix the ears, minds, and bodies of those 10,000 audience members. A photo illustrating the article shows thousands of people dancing and cheering, hands waving triumphantly in the air, nerve endings assaulted, tickled and massaged, bodies reduced to a mass of throbbing goo.

Last April I went to hear the Juilliard Orchestra play Richard Strauss’s Alpine Symphony at Avery Fisher Hall. I brought my 13-year-old son, Sam, who was reluctant to come with me, insisting it would be boring. I convinced him by describing Alpine Symphony as a kind of movie about a journey to the summit of a mountain with a huge orchestra supplying both image and sound. I promised him it would be loud and exciting. So we went. The performance was excellent. As usual, the Juilliard students played their butts off and the conductor, Emmanuel Villaume, shaped the music beautifully. It was a big success—but not for Sam. Throughout most of the performance he was leaning head in hand on the armrest, barely awake. At the end of the piece, he said, “Dad, you told me it wouldn’t be boring.”

Sam’s reaction wasn’t a commentary on the performance. He was reacting to a sound picture; he was lulled into disinterest by a sound that came from way over there, pale and distant, about as far from cinematic as one could imagine in a piece of this size and scope. I know the acoustics of Avery Fisher Hall leave a lot to be desired. They’ve been—to be kind—problematic ever since it opened, in 1962. But my critique is not specific to Fisher. It would apply equally to any large concert hall with more than 2,500 seats (Kimmel Center in Philadelphia, Davies Hall in San Francisco, Orchestra Hall in Chicago, etc.). When winds and brass are playing, the violins are inaudible. When the brass are playing, the winds and strings are generally a filigreed, ghostlike presence. I can seldom even sense a bass presence; it is tepid at best. Listening to the Alpine Symphony in Avery Fisher Hall requires a vivid aural imagination, what I call the fill-in-the-blanks method—it’s more deciphering than hearing all the parts. I imagine the parts I can’t hear (many), and I fill in the blanks (perhaps better that way).

Is it possible to amplify a symphony orchestra in a concert hall in a way that would make it a cinematic, visceral mind-body immersion without turning it into a death-metal concert? Can these giant American concert halls be transformed into the equivalent of Red Rocks Amphitheater? I don’t know. But I think it merits, as politicians like to say, a thorough investigation. Amplified music in large concert halls, mostly for pop, jazz, or Broadway show concert performances, is crude and noisy, usually running through a PA system. Very 1960s. Practically antediluvian.

The moment has arrived for significant time and money to be spent on a serious and state-of-the-art exploration of concert hall amplification, but even the decision to begin the investigation would be controversial. If such an experiment were undertaken, the resulting furor would in many ways mimic the quasi-religious war going on in the U.S. Congress. The music conservatives would defend the sacrosanct tradition of the unamplified classical music concert; they would proclaim that it is incumbent upon us to respect and preserve the conditions under which our musical canon was written and performed. The advocates for jacking up the sound would probably be a younger, more diverse group and would come from many parts of the musical world. Experiments in amplification would follow many different paths. There would be much trial and error. There would be difficulty coming to a consensus in even defining what would constitute a beautiful amplified sound for a symphony orchestra. But the goal would be clear: make the sound louder, with clarity and definition.

Greenwich Village’s Le Poisson Rouge has been using amplification since it opened, in 2008, in shows that vary from rap to string quartets to electronica. The sound is exciting, which makes the space exciting, which makes Le Poisson Rouge the premiere multi-use venue in New York City. Musicians of all kinds clamor to get dates there. Admittedly, it is much easier to amplify the smaller forces that appear at a space like Le Poisson Rouge, which accommodates 250 people seated or 700 standing, but that in no way makes addressing the sound problems in big concert halls any less urgent. The acoustics of the Metropolitan Opera House are amazingly good for a theater that seats more than 4,000 people, but I wouldn’t mind the sound being even louder and more vivid. The Met has gone into the movie business and—to the amazement of many—the endeavor has been extremely successful. I find I prefer to see and hear operas in movie theaters. The experience is heightened, cinematic, more operatic.

The New York Philharmonic and Philadelphia Orchestra are not about to go into the movie business, but perhaps they would consider making their performances more of a spectacle. A logical place to start would be a 21st-century audio/visual system. Come on guys, make my organs rumble—turn it up!