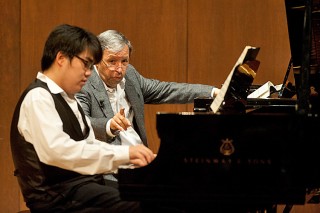 For Murray Perahia, “music isn’t really about action—it’s about emotion.” These words were echoed many times during the revered pianist’s visit to Juilliard in early October, during which he gave a series of lectures and master classes, including one that was open to the public, on October 3. Perahia transcended the realm of the technical in his criticisms, focusing not just on the art of piano playing or even the art of musicianship, but more fundamentally on the art of the music.

Perahia began his visit on October 1 in an unusual manner: he gave an illuminating morning lecture on Schenkerian analysis, conducted in conjunction with faculty member and Schenkerian scholar Carl Schachter. Through this type of analysis, Perahia and Schachter demonstrated how vast, complex pieces of music can be reduced to a single central idea, oftentimes a simple relationship between pitches, and how this in turn can “propel the music from within,” as Perahia put it. He explained that he first came to Schenkerian analysis during his student days at Mannes (where he studied with Schachter), and described the impact this method of thought had on his approach to performance.

During the public master class, Perahia spent little time on technique, instead examining the significance of a piece of music on both the smallest and largest of scales. This was evident from the beginning, when third-year bachelor’s student Jiale Li played Beethoven’s Piano Sonata No. 30, Op. 109. Perahia began by describing how the essence of the entire sonata could be explained in the first two notes, a G sharp rising to a B, through Schenkerian analysis. He posited that this seemingly mundane relationship was actually a profound statement: “You go through life and you get to the top and the only way is down, and that says a lot in many ways.” At one point, Perahia asked Li to play a section with more boldness saying, “I think that the sonata is a plea for peace. Peace is only for the brave— it’s not for the acquiescent.”

Throughout the class, Perahia’s comments reflected a unique mindset rooted in an in-depth understanding of emotion. After Li played a section “coldly” at Perahia’s request, Perahia immediately responded, “Not cold in that way, cold in the Schubert sense—desolation,” a comment which surprised and amused the packed Paul Hall audience.

The second hour of the three-hour class featured an emotional performance of Chopin’s Barcarolle in F-Sharp Major, Op. 60, by third-year student Ryan Reilly. Perahia, noting that he likes “to put stories to these pieces,” described his own story of the Barcarolle as a man’s dream recalling a romance, but it wasn’t the specific events within the story that were important, he said. “Actions aren’t what music portrays, emotions are what it portrays, and this is infinity.”

The master class concluded with a riveting performance of the Brahms Variations and Fugue on a Theme by Handel by second-year master’s student Jun Sun. Perahia again gave an in-depth analysis of the variations, dividing the piece into groups of six variations. In each, Perahia noted every aspect of the theme upon which Brahms was capitalizing—and every way in which it deviated from the original. The audience was given a special treat as Perahia took to the piano more than he had earlier in the class to illustrate his remarks.

Perahia’s entire visit was typified by a refreshing lack of ego—no name-dropping or self-aggrandizing anecdotes; for him, it was all about the music, and the insights he shared were not only valuable to the participants, but also to the audience. It was no surprise when, at the conclusion of the master class, the audience erupted into a standing ovation.