Most students arrive at Juilliard raring to go. But Nathan Louis Jackson (Artist Diploma, ’09, playwrights) was exhausted. It was the summer of 2007, and he and his wife and their 3-month-old daughter had just made a tough move from Kansas to New York City. “I was thinking, I’ve got to prove myself, but I hadn’t had time to write—I’d spent the whole summer on life stuff,” Jackson told The Journal recently. 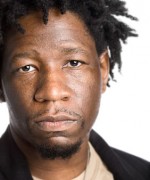 He ended up taking a play he had already written and “revamping it 95 percent,” he said. “I tried to make it not seem like the first thing I’d written, but I figured because it was close to my heart it might be easier to knock out.” He called the result Broke-ology, and it ended up being a wild success. Workshopped at Juilliard that year, it premiered at the Williamstown Theater Festival a year later, and was a hit at Lincoln Center Theater in 2009, a few months after Jackson graduated. On November 10, the play will return to its roots when fourth-year drama students will perform it at Juilliard under the direction of Kent Gash.

Broke-ology is the story of two sons at crossroads. Their mother died years before, and their father (played by Sekou Laidlow in the Juilliard production) is getting increasingly feeble as a result of multiple sclerosis. The older son, Malcolm (Grantham Coleman) managed to escape the poverty of their hardscrabble neighborhood. He’s back from grad school to help take care of his father, but he wants to move to another city and further his career. The younger brother, happy-go-lucky Ennis (Jeremie Harris), has remained at home, but now his girlfriend is pregnant, and he’s scrambling to get more shifts at his dead-end restaurant job—and chafing at the increased responsibility he faces.

“It’s a little bit of fiction mixed with real-life things,” said Jackson, who grew up in an impoverished neighborhood in Kansas City, Kan., similar to that in the play. It started out as a scene, between an ailing father and his son, who is worried about leaving home for college. “That’s kind of true: my father had M.S., and when I was about to go to school, I was thinking, ‘K[ansas] State will be there next year, should I be home to help take care of my dad? But a big difference was that my mother was still around, she hadn’t passed, and she told me to go to school.”

Ennis:[B]roke-ology. It is a complex new science that examines two things. One, being broke, Two, staying alive despite your brokeness. ....
Malcolm: Okay, you’ve got me interested. Let me hear a few of your theories.
Ennis: ... I thought of this one while I was in the bathroom. Wrote it out on some toilet paper. Goes like this.(Ennis closes his eyes as if he is struggling to remember.) Fried bologna times sidewalk sales plus minimum wage minus health insurance/adequate education equals Brokeness times being alive. Bam! Broke-ology, baby.  (Both laugh.)
Malcolm: You are a fool.
Ennis: Ain’t nothing changed.
Malcolm: I still say it’s not a science.
Ennis: I know. I know, but what if it was? We’d all have degrees in that shit.
Malcolm: Masters. Doctorates, maybe. ...
Ennis: I’d teach “How to Stretch a Dollar 101.” And you could teach “Cooking with Government Cheese.”

Many smaller details from his life show up in the play as well—some of the brothers’ banter (Jackson also has a younger brother), and painting Christmas ornaments black so they’d look African American. There’s also an ongoing bit in which Ennis and his friends have decided to “stop saying the N-word—and then when they do, they have to say ‘I love black people’ five times,” Jackson said. “That’s ripped from me and friends at Kansas State, which is in [the small, largely white, city of] Manhattan, Kansas, which wasn’t like Kansas City: we stuck out as being African American, and we realized, we can’t say that word.”

Another ongoing bit in the play involves dominos—the brothers and their father bond by playing together. “I discovered a love for dominos growing up, and when we wanted to play at school, we made the argument that it was math and they let us play in the lunchroom in high school,” Jackson said. “There were times I literally almost flunked out because of dominos. I wasn’t the best student.” One thing he loved at school, though, was competitive speech and debate, and it was through debate that he got his first experience playwriting. He found that there wasn’t a lot of work written by African-American writers that he could use, so he decided to stand out in the competitions by writing his own monologues.

When Jackson applied to grad school, he found out two days before his daughter was born that he’d been accepted to Juilliard. Jackson and his wife, who met in college (she studied drama therapy), decided to make the move to New York City despite the crazy timing. They ended up loving living here and taking advantage of the arts scene, but these days, he divides his time between TV-writing gigs in Los Angeles and Kansas City, where his wife and daughter are now based full time, and where his mother still lives in the house where he grew up.

At Juilliard, he said, “the first thing you notice is the level of talent of the writers and professors. I was surprised that I even got there. They only accept four or five people a year, so I didn’t bank on getting in. I hope no one does.” He found he thrived on being constantly challenged by his classmates. “You say to them, this is a great play, but you say to yourself, ‘dude, I have to go home and write.’ It really pushes you to go home and work on your craft.’”

Broke-ology is at the Stephanie P. McClelland Drama Theater, November 10-14.