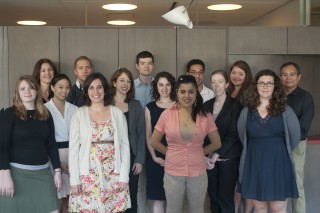 Christopher Alonzo, assistant director of financial aid, is a new resident of New York City. He moved here from Rochester and had previously worked in financial aid at Monroe Community College and the College at Brockport. He holds a bachelor’s degree in finance and enjoys spending free time with his dog, playing the piano, and taking in all that the city has to offer.

Katherine Baltrush, production activities administrator for Vocal Arts, holds a bachelor’s degree in voice performance and a master’s in musicology. Her graduate studies focused on contemporary vocal music and culminated in a study of Thomas Ades’s The Tempest. She comes to Juilliard after having served as the information and research manager and managing editor of Opera America, the magazine of Opera America, an industry trade association.

Audrey Chait joins the Vocal Arts staff as projects administrator for curriculum and outreach. A native of San Francisco, she graduated from Brown, where she studied literary arts. While there, she directed three fully staged opera productions and was heavily involved in theater and music as a playwright, singer, and producer. She is an alumna of the Juilliard Professional Intern Program, an avid Lindy hopper, and a devoted resident of Brooklyn.

Jeff Cuyubamba is the new production/design assistant for the Publications and Creative Services departments. A native New Yorker whose Peruvian grandfather was a folk-music composer, Jeff has worked as designer, photo editor, and art director at various New York City publications including eight years at The New York Observer. He has had two exhibitions of his 1980s New York City underground music photography, both in Japan, and also contributes photography to N.Y.C.-based music blogs. Jeff lives in Astoria with his wife, Atusko, and their two cats, Maru and Muku.

Rebecca Driesen has joined the Office of Student Affairs as the residence hall director for community development. She received her B.S. from Dickinson College and her M.A. in college student development from Appalachian State University. Originally from Brooklyn, she is happy to be back in the city.

Diane Feller, Production Department administrative assistant, came to Juilliard to pursue her passions for education and supporting the arts. She developed her career as the company manager of the Hudson Valley Shakespeare Festival and has continued on to multiple areas of the arts including tour management for Fox Television’s So You Think You Can Dance and stage management for The Radio City Christmas Spectacular. A graduate of
SUNY-New Paltz she holds degrees in public relations and business administration.

Melissa Hoodlet, the coordinator of student activities in the Student Affairs Office, attended Humboldt State University as an ethnic studies major and has a graduate degree in higher education/student affairs administration from the University of Massachusetts, Amherst. After working in student affairs for about eight years at various schools throughout the country, Mel decided to settle in New York City. She enjoys the outdoors, going to the theater, and listening to jazz—and her most memorable N.Y.C. moment was hearing Andrea Bocelli sing “Con te partiro” in Central Park.

Catherine Hsieh is the new financial aid/academic support services coordinator. She recently graduated from Princeton with a B.A. in sociology and previously held internships at the Washington Ballet and American Ballet Theater. She enjoys ballet, baking, and reading books in her spare time.

Sarah McLellan, assistant administrative director for the Drama Division, has held administrative positions at Theater Communications Group, the Williamstown Theater Festival, and the Manhattan Theater Club. Most recently, she split her time between Fractured Atlas, a national arts service organization, and A. D. Hamingson & Associates, a development and strategic planning consulting firm. She holds a bachelor’s degree from Sarah Lawrence College and completed graduate coursework in arts administration and mental health at New York University. Originally from the Boston area, Sarah currently resides in Brooklyn.

Mason Peralta has joined the Information Technology Department as the Macintosh and music technology specialist. His diverse background in the arts and technology includes degrees in classical guitar performance and sound design from the Chicago College of Performing Arts and the University of Edinburgh, respectively.

Jasna Radonjic, Jazz Studies administrator, has more than 15 years of experience in artistic administration. Most recently she was at Jazz at Lincoln Center, where she managed the Rhythm Road—American Music Abroad, a State Department-sponsored cultural diplomacy program. Previously she had been executive director of the American Composers Alliance. She holds a master’s in music and theater studies from Denmark’s Copenhagen University and a master’s in musicology from New York University, where she specialized in the theatrical works of John Cage.

Anna Royzman, performance activities coordinator for the Pre-College Division, grew up in New York City but originally hails from Odessa, Ukraine. Anna studied at Juilliard, where she received both bachelor’s and master’s degrees in piano. When not practicing, she enjoys cooking, reading, and video games.

Holly Tedder, assistant registrar for advisement and academic support services, is a Florida native and holds a B.A. in piano performance from Rollins College. Prior to Juilliard, she worked as an assistant director of admissions at New York University. Currently a committee member for the American Musicological Society, she enjoys volunteering, cooking, and reading in her spare time.

Evan Williams, senior circulation administrator for the library, recently moved to New York from Tallahassee, Fla., where he held a similar position at the Florida State University music library. He received a master’s in music theory from F.S.U. with interests in popular music, rhythm and meter, and 20th-century American music. In his free time, Evan enjoys cooking, exploring N.Y.C., and cheering for Seminole athletics.