The Other Mendelssohn: A Doctoral Forum

On November 10, R. Larry Todd, the arts and sciences professor of music at Duke University, presented an unfamiliar subject at the second Doctoral Forum of the academic year. Todd, a Guggenheim fellow and a fellow of the National Humanities Center, is one of the foremost scholars of 19th-century music, especially of the composer Felix Mendelssohn. Author of the acclaimed biographical study Mendelssohn: A Life in Music, Todd’s latest work, Fanny Hensel: The Other Mendelssohn, focuses on Felix Mendelssohn’s sister, who was also the topic for his talk. 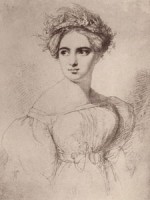 A portrait of Fanny Hensel by her husband, Wilhelm Hensel.

Until recently, minimal attention has been paid to Fanny Hensel (1805-47). However, we are now discovering that she was not only intelligent and cultured, but also an active performer and composer—though not in the public spotlight—with stylistic independence from her brother and underappreciated abilities.

Todd calls the Mendelssohn siblings “musical twins,” as they were both raised in Berlin and were pupils of the same teachers. Fanny, the oldest of the four Mendelssohn children, had perfect pitch and was also a formidable pianist—perhaps as accomplished as her brother. Having performed Bach’s Well-Tempered Clavier by memory at age 14, Hensel also composed cadenzas to Beethoven’s piano concertos and studied his “Hammerklavier” Sonata, no small task even for today’s most prolific pianists.

Though Hensel was a talented pianist with a keen interest in composition, her father dictated that music must not be the main focus of her life. As a daughter of a wealthy Jewish family, she faced a combination of gender and class issues making it inappropriate for her to concertize or publish music under her own name.

While Felix was an international celebrity, Fanny’s performances were limited to the Mendelssohn residence in Berlin. Because the residence was able to accommodate a large audience of 200 or more people, her concerts were neither public nor private, but nonetheless hidden from the auspices of the press. Her regular performances were instrumental in providing a venue for her to find her own voice as a concert artist, composer, and conductor. As a result, her compositional style was very personal and not influenced or clouded by public opinion.

Approximately 450 compositions by Fanny are known, including a few published under Felix’s name. Hensel’s most compelling works are her songs, described by Todd as “epigrammatic in intensity,” and her short character pieces for piano. Predominantly a miniaturist, she also wrote in larger forms, including Bach-style cantatas, a string quartet, and several piano sonatas.

Because of Felix and Fanny’s close relationship, nearly identical education, and frequent correspondence, one can expect a certain amount of stylistic similarity between their music. Referring to them as “mirroring devices,” Todd revealed several instances of musical allusion between their works. Former scholarship reasoned that these resemblances were merely Fanny copying Felix. However, as Todd noted in a recent e-mail message, “When the bulk of her manuscripts became available in the Berlin Staatsbibliothek in the 1990s, I was afforded the opportunity to examine hundreds of compositions and gain new insights. Suddenly it became clear that Hensel was not only a songwriter and practitioner of the piano character piece, but also a composer who ventured into larger genres. It also became clear that Hensel was not merely an epigone of her brother, but a composer whose own voice could be detected in her structural and formal freedom, harmonic spontaneity, chromatic part-writing, and intense expressive edge.”

Though cultural restraints prohibited Hensel from composing professionally, thus creating a “veiled anonymity around her,” she thought more seriously about this prospect later in her life. Finally, in 1846, after being approached by publishers, she decided to pursue the possibility of putting out some of her music. Unfortunately, the following year she died from complications of a stroke. It was the great tragedy of her life that she passed away just as she was being recognized.

Hensel’s life and music may only now be receiving the attention they deserve. As Todd emphasized, this new scholarship produces some probing questions. “The emergence of Fanny Hensel’s music compels us to reconsider the question of the Mendelssohnian style and to admit the possibility that Fanny, some three years older than her brother, had a part to play in the early formation of that style,” he explained. “In the broader context, the emergence of Fanny Hensel’s music reminds us that much of 19th-century musical culture did not find its chief outlet on the concert stage, but in other venues, including the salon and other domestic settings, and that ‘private’ music making … provided important outlets in which composers could freely experiment and try out musical ideas. And finally, the emergence of Fanny Hensel as a recognized 19th-century composer sheds new light on the role of women in music, and on the question of canon formation.”

Though we may view the 1800s as the “familiar century,” as Todd’s lecture showed and as Hensel’s story proves, there is much left to discover.