Though his first love is Shakespeare (he’s got five Shakespeare Theater Company productions to his credit, as well as Lincoln Center’s recent production of Cymbeline), Daniel Breaker (Drama, Group 31) is currently exploring a bard of another sort—appearing in the Broadway musical Passing Strange as the younger version of composer/performer Stew, who provided the book and lyrics for the show as well as the music (with Heidi Rodewald). The 27-year-old actor, an army brat who spent time growing up in Illinois and Germany, says he can relate to the struggles of a young man trying to find his place in the world. 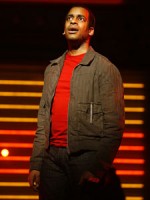 Daniel Breaker as Youth in a scene from Passing Strange.

Passing Strange has had a long journey from the Sundance Theater Lab to Broadway. What has that transition been like for you?
It’s been a wild transition. At the theater lab out at Sundance, the actors do double duty—they do one show with a large part, and in the second show, a smaller thing. I went in 2005 mainly for a play by Tonya Barfield—who went to Juilliard—called Blue Door; it’s a two-person play. That was my main focus, but at the last minute they said, “O.K., we need a black guy,” and they handed me a script by this guy named Stew. I didn’t know who Stew was. And I fell in love with the show. It was very close to some things that I went through in my life: a coming-of-age story about this kid growing up in L.A., a black middle-class teenager who doesn’t like where he’s growing up in this Baptist church. He goes off to Amsterdam and then Berlin, and it’s a wild ride of him trying to find authenticity in music and drugs and sex and all these things. It’s not exactly Stew's life; call it autobiographical fiction, but some of the events are close to what he went through. Stew plays the narrator, and I play Youth—I don’t even have a character name, so it becomes a sort of Everyboy who symbolizes all youth. What’s unique about the show is that it’s told from a rocker’s perspective. Stew is up there with his band, and I’m up there with five other actors, and we sing, we dance, I play guitar, I do everything but bake a quiche. It’s all over the place. It went through two seasons at Sundance, endless workshops, Berkeley Repertory Theater, the Public, and now here. Thank God we went through all that, because we really found our groove over the course of three years.

What has been the most difficult part of the process?
You really threw me … what’s the most difficult? I think this show is the most physically and emotionally demanding thing I’ve ever done. Yeah, it’s safe to say. Nothing is the equivalent of what this show requires of me. Because the storytelling styles change, as far as genre—we create a kind of Brechtian cabaret, we do vaudeville, we do very naturalistic acting, we do rock singing, blues singing, punk rock. And emotionally, even at the end of the show—I won’t give it away—but there’s some stuff that requires a certain kind of focus. Fortunately, all that stuff I learned at Juilliard. I spent four years at that place, and every single thing that I learned at Juilliard, I think I’m using on stage. It’s wild!

What tools or changes to your process will you carry forward from this experience?
Ease of movement; everything will change. One thing—more so than with any other project I’ve worked on—is that we’ll set something on stage, we’ll try this line, we’ll do this moment, and the next day it’s different. Also, the way Stew writes: he doesn’t sit a typewriter and write; he’s a musician, so he sort of sculpts music. As actors, we want to create these waypoints throughout a play—I’ve got this beat here, a series of beats and moments and little discoveries, so I’ve sculpted this thing. And now here’s this guy who doesn’t work that way. So it’s sort of strengthened my ability to adapt to a new moment at any given point in the process. And it’s actually taken a lot of weight off of me, and has prevented that sort of actor quality of “here, I’m performing now; I’ve set this thing” … which makes it a lot of fun, because the audience is going to be different [at each performance], so why should I be so strict about locking this arc into this process?