The daughter of distinguished American playwright Romulus Linney, actress Laura Linney (Group 19) may have been born to the stage—but the big screen has played a major part in her career. She has gathered accolades for some 30 films over the past 15 years, among them The Truman Show, You Can Count On Me, Love Actually, Kinsey, The Squid and the Whale—and, most recently, The Savages, in which her portrayal of a troubled woman coming to terms with both her brother and her ailing, estranged father has garnered her third Oscar nomination. Linney recently returned to Juilliard to discuss her craft with an eager group of current students. 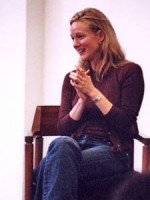 Laura Linney, pictured here in a visit to Juilliard in September 2003, returned to the School to speak to students in December.

How is the role of Wendy Savage different from any of your previous roles, and what would you say it has contributed to your development as an actress?

Well, hopefully every part you tackle is different from what you have done before. What was fun about playing Wendy is what a complete mess she is. And how emotionally arrested she is. Adolescent in her mood swings, and unrealistic in her expectations. The challenge was to be honest about all her faults (some of which are pretty ugly) and play them loudly while not losing the innocent qualities which anchor her to the story and hopefully connect her to the audience. Having Phil Hoffman and Phil Bosco to work with, though, made it pretty easy. They are amazing in their skill and generosity.

The Savages tackles some serious issues (family dynamics, aging parents) in a very nuanced and humane way. Did working on the film change any of your thoughts about these things?

It certainly made me think about the future. And what I need to do to help myself and my family when loss happens. Which it inevitably will. That’s just part of life and no one gets out of it, unless you die first. So I’ve asked my relatives who I am responsible for to help me by expressing their wishes so I’ll know what to do when things get emotional and scary. It’s the biggest gift I think parents can give an adult child. Because when you are grieving, you can barely function, and you can make decisions that you can regret later. And that can all be avoided by talking ... however awkward everybody feels.

What sort of responsibilities do you feel in being a leader in the industry?

I think if I made decisions based on that, I wouldn’t be terribly effective. I just do what I do and … you know, sometimes I make the right choices and sometimes I don’t. I love talking to students.

Having achieved the level of success you have, do you feel a certain pressure has been lifted off of you, which allows you to find more balance in your life?

Is that because of the life we’ve chosen?

Yeah. Yeah. And for some people it’s a vocation, not just a profession. I was taught from a very early age you have to give 120 percent. You must. And that’s hard to put the brakes on that. If you ever do less than that, you feel that something’s wrong; you’re not doing the best that you can. So it’s hard to realize that it’s O.K. to stop doing it. It’s a constant struggle and that’s just something you just have to sort of figure out as you go along. And I still battle with that. Most people do.

What principles of process do you hold true in all of your work?

Story first. Story first. Don’t skip steps. And if you’re nervous or scared, concentrate on the other actor.

What makes a role difficult, and how do you approach the challenge?

That’s an interesting question, because it depends upon the level of the writing. … You can look at The Crucible and actually, that was pretty easy, because the writing was so good, and my co-workers were so good, and the direction was so good. And when everything is in place like that, and you know how to work, and you know how to do it, it just goes. So it’s the stuff like … that doesn’t seem terribly flashy or interesting, that’s the tough stuff. That’s the harder stuff.

Knowing what you now know, what advice do you have for current students?

I think just keep an open mind. Don’t be overly judgmental of yourself or others.

Have you become less hard on yourself?

Yes. I still have issues. I mean, I’m very hard on myself and I always have been. But I find that the more I let go of that, the happier I am and the better my work is. Because you’re wasting so much time beating yourself up that you’re distracted and not concentrating on what your work is.