A Repeat Performance for an Extraordinary Quintet

Musical programs are generally of two types: one emphasizes homogeneity, putting together like composers, or works of a single composer; the other, variety and contrast. Perhaps because a woodwind quintet, by the nature of its instrumentation, is an ensemble of contrasts, we, the members of the New York Woodwind Quintet, much prefer to play programs that offer great variety and contrast—of style, of orchestration, of genre. We also try to create programs that expand the limits of standard woodwind performance, to keep upping the bar of expressiveness, technical fluency, and ensemble to which wind players can aspire. 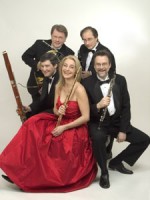 For our March 18 concert in Paul Hall, we will be joined by the wonderful pianist Ursula Oppens. We had the great fortune to play Elliott Carter’s brilliant Quintet for Piano and Winds together at the retrospective concert of Carter’s wind music we gave last year at Merkin Hall as part of the Carter centennial celebration. Performing that work was such a moving experience, for us and for the audience, that we felt we had to perform it again as quickly as possible.

An extraordinary work, Carter’s Quintet is more akin to an opera than to an instrumental composition, with quick changes of scenery and character. It has moods ranging from comic buffoonery (played by the squeaky E-flat clarinet, of course) to moments of great romanticism in the French horn, to an extraordinary split-personality duet played by the bassoon with itself. Considering Ursula’s and our busy schedules, we hardly believed that we would find any mutual time for a repeat performance, but you can imagine our delight when she told us that she would be able to join us at Juilliard. The sophistication of the Juilliard audience and the importance of exposing students (hopefully destined to become the cutting-edge performers of the next generation) to such an important work make this the ideal venue for a repeat performance.

Once Ursula and the Carter were set, the question became: What would both highlight that work and serve as a worthy contrast? Despite our long friendship with Ursula and our artistic camaraderie, we have not had many opportunities for collaboration and were hoping to take full advantage of her participation. I left some scores with her to look over, and she selected Ludwig Thuille’s Sextet, Op. 6, for piano and wind quintet. Thuille (1861-1907) belongs to that rank of composers very highly regarded in their time, but now completely forgotten. A lifelong friend of Strauss, he was considered an important opera composer and wrote much chamber music that was very popular during his lifetime. Though his name may be hardly known to the musical public, it occupies a special place in the hearts of wind players, because his sextet is the closest we get (without transcription) to a work for piano and winds by Brahms. If Carter treated his Quintet as an opera, Thuille thought of his Sextet as both a piano concerto and a symphony. Taking its inspiration from Brahms’s Second Piano Concerto as well as from wonderfully colorful yet homogeneous wind writing of Brahms’s early Serenades (Op. 11 and Op. 16), it is an example of wind writing at its most warmly Romantic.

To launch the second half of the program, we needed a work not too far from the Carter and also not too long. We decided on La Mano Sinistra, the work I wrote last year which we were supposed to play, but had to cancel at the last minute due to illness. I wrote it as a dialogue between the flute offstage, and the oboe, clarinet, bassoon, and French horn in the dark onstage. Without comparing it in any way to Carter’s masterpiece, I should mention that it uses some compositional techniques pioneered by him, and thus, we thought it would create a smooth transition to the Thuille Sextet. For this performance, I decided to extend the flute part and add simple lighting effects.

Now, the question remained: With what to begin the program? We thought we needed a work that formed a dramatic contrast to the Carter Quintet and yet had unexpected elements in common with it. (Indeed, Carter’s own music is characterized by great dramatic contrasts.) We looked for something written in a different style but also built on the idea of contrast. Of all composers, surprisingly, the one we all think of next to Elliott Carter is Mozart—because, despite the huge difference in musical language, Mozart (like Carter) is able to combine different affects and elements in a virtuosically seamless way, and (like Carter) Mozart thought of instruments as individuals and wrote for their individual characteristics. Our French hornist, William Purvis, has made several brilliant arrangements for woodwind quintet, among them one of Mozart’s String Quartet in G Major, K. 387. This is a work which begins with great contrast: within the opening melody, the first measure is forte, the second piano, the third forte, and the fourth, again piano. It is also a work that challenges us to play with great ensemble, great musicianship, and great individuality. In this way, it is—despite its contrasting language—very close to Elliott Carter’s Piano and Wind Quintet.