Rhodes on Leaving the J.S.Q. 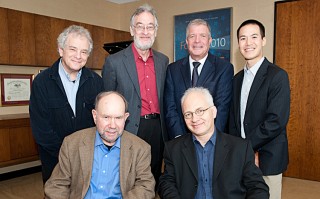 The present and future Juilliard String Quartet posed with President Joseph W. Polisi when it was announced that Samuel Rhodes (front row, left) would be retiring from the quartet and that Roger Tapping (front row, right) would replace him. Back, from left: Joel Krosnick, Ron Copes, Polisi, and Joseph Lin.

My 44th season as the violist of the Juilliard String Quartet began several months ago to the inspiring sounds of late Beethoven and Elliott Carter ringing in the air. With the echo of these masterworks still resounding in my ears, I am acutely conscious of mixed feelings of great regret and joyous anticipation that this season will be my last.

Although I am still in very good health and I sense that my playing skills are undiminished, I feel that I have reached an age where I must use the time I may have left for things other than the string quartet to which I have been so dedicated for so many years. It will be difficult to leave my three incomparable colleagues and the awe-inspiringly beautiful music that have been so much a part of my existence for so long, but I am sure that, at this time of my life, this is the right thing to do. I am grateful for the privilege I have had to rehearse, debate, and perform the most intimate, profound, and sometimes heaven-storming music of all the great composers of the past and of our own time on a daily basis. I will sorely miss the constant interaction, musical and otherwise, with Joe Lin, Ron Copes, and Joel Krosnick as we participated in our own “quartet universe.”

Roger Tapping, the violist who has accepted my colleagues’ invitation to join the quartet, has the artistry, experience and expertise to take part in carrying it forward with the same spirit and ideals as it has had in the past. I am very proud to have him take over the viola position and wish him the best in his new life.

In recognition of my farewell and Roger’s welcome to the quartet, we are offering this special program for our Tully Hall concert on February 26: Beethoven Quartet in F Major, Op. 135; Rhodes String Quintet; and Mozart Quintet in D Major, K. 593.

As you see, this program includes my own String Quintet, which I composed in 1968 as my M.F.A. thesis at Princeton University. I’ve had an interest in composing since my earliest musical studies, even producing some very short pieces at the age of 8 or 9. Although my main concentration was on developing my skills on the violin and, a little later, viola, I always kept up some involvement with composition. I had pieces performed at the chamber music recitals my teacher, Sydney Beck, as well as in concerts at my high school and college. During my senior year in college, the great violinist, teacher, and mentor Felix Galimir (Juilliard faculty 1962-99), asked me to join his string quartet. One of the very first pieces we learned and performed was the String Quintet of Roger Sessions. This wonderful work, written in a very personal, distinctive style, really spoke to me and led me to apply to graduate school at Princeton, where Sessions (Juilliard faculty 1965-83) was a distinguished professor in the music department. I was admitted and had my coveted opportunity to study with him. During my time at Princeton (1964-65 and 1966-68), I also came into contact with Milton Babbitt (Juilliard faculty 1971-2008), Earl Kim, and Edward Cone, all of whom had profound influences on me. The main work that I labored on in those years was the String Quintet.

The first movement shows most graphically the influence of Sessions’s quintet. Its musical goal is indeed very similar to his: a very long, operatic melodic line floating above intricately crafted, faster moving subordinate material. My own musical voice emerged more and more in the last two movements of the piece. The second movement is very much based on the opening unison and its expansion which blossoms into the themes that make up the movement. The third movement takes an unusual shape, Rondo-Variations, in which the rondo element is not a repeated theme but a group of five musical fragments which, when expanded and transformed, provides the material for the variations as well. Each of the five instruments has a variation in which it is featured.

Since I was very much intrigued and moved by the Second Quartet of Elliott Carter (Juilliard faculty 1966-84), which I had heard several times but not yet performed, my imagination was sparked to make distinct character differences among the instruments. The cello and first viola have very expressive variations, the former dramatically excited and the latter intensely nostalgic. The second viola and second violin have more rhythmic and scherzando roles, the former more methodical and deliberate and the latter more fleet and agitated. The first violin has a fanciful, virtuoso cadenza, the centerpiece of the movement, with the four remaining instruments responding with sustained, varying harmonies.

I was fascinated, as so many of us were back in the ’60s, by the harmonic discoveries of the Second Viennese School. I studied the Berg Lyric Suite not only in order to attempt to overcome the formidable difficulties of performing it, but also from an analytic point of view. It was the elective work I chose for my oral examination for the M.F.A. degree. In my own piece, I used the 12-tone system but in my own way, which gradually developed as I was composing. I had hoped then, and still do today, that this unifies the harmonic and melodic elements of the piece and gives the harmonic language a special flavor.

My post-J.S.Q. plans include continuing to teach and serve as chair of the viola department at Juilliard, participating in the Marlboro Festival during the summers, and still being active as a performer. I also have other projects in mind: a contribution to the technical literature for viola and an arrangement of a work that would have the possibility of becoming a useful addition to the viola classical and teaching repertoire.

I would like to express my extreme gratitude to my colleagues past and present, whose friendship and devoted artistry have meant so much to me. I would also like to thank President Joseph Polisi and Dean Ara Guzelimian for their unstinting support of the J.S.Q.

Finally, I would like to thank Hiroko Yajima Rhodes (Diploma ’70, violin), my loving wife of 44 years, and my two daughters, Amy and Harumi (Pre-College ’97, B.M. ’02, violin; assistant faculty), for being at my side to share the wonderful journey I have had and in helping me to make the difficult decision to leave the quartet.

Warmest regards to everyone at Juilliard as I savor every moment of my final J.S.Q. season and look forward to the future.