The tarp is rolled off the infield, and the players enter from left and right and stand at attention for the national anthem. The game begins, and fielders leap through the air with precision and grace, their passion and intensity almost palpable. The tempo of the game quickens with back-to-back hits and eases with a brilliant pitch sequence. The cacophony of cheers, umpires’ calls, vendors’ cries, and (of course) the crack of the bat, echoes in the open acoustic of the stadium, rising and falling with the intensity of the game. Fans leave the stadium satisfied and exhausted by the fervency of the performance—as much as if they had attended a magnificent orchestral concert or a dramatic play. 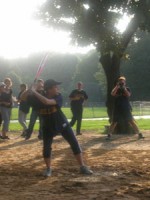 Amanita Pleasant-Heird, assistant to the vice president for development and public affairs, at the plate against the Manhattan School of Music on August 23, on the Central Park Great Lawn.

A Juilliard connection with baseball, a sport whose cadences resonate with so many artists, should shock no one, yet five seasons into the life of the most recent incarnation of Juilliard softball, there are many who would be surprised to hear of its existence. Led by lighting designer Ted Sullivan, administrators, staff members, and even a student take the field each week in Juilliard blue. The IT department’s network and operations manager, Jeremy Pinquist, a founding member who wrote about the team’s first season in the October 2003 Juilliard Journal, has noticed that, even though the team has started to pick up some fans, “the major response in the building to seeing us in jerseys before a game is bemusement.” (The team’s reaction to such a reception: amusement.)

Each of the players found the team in his or her own way. Many joined after hearing about it from co-workers—resulting in strong representation from a few departments, particularly IT. But the library’s acquisitions assistant, Noah Opitz, who joined this season, admitted that he “was at Juilliard for two years without knowing there was a softball team,” and learned about it from an e-mail inviting spectators to a game last summer. The fabric of the squad is a patchwork of players from Drama Division, the Production Department (including the scene shop, electrics, props, and costumes), the Evening Division, the library, development, IT, the Pre-College Division, publications, and others. That mixture seems to be one of the great benefits of the team. Romel Jarin, administrative assistant in the Evening Division, loves to play with his fellow co-workers. The library’s senior circulation administrator, Dan Yurkofsky, a new power-hitter in the line-up, has played in other leagues, but joined the Juilliard team this year specifically to meet some of his colleagues. Pre-College co-administrator Rob Ross explained, “As a hard-working Juilliard employee, for many years my social interaction was limited to my office and the relatively small community of offices with whom I interact on a weekly basis. This team has exposed me to people who I would never have met before, and truly enjoy spending time with. And now, when Pre-College needs to borrow a room from the Drama Division, I’m the person who calls with the request because of my ‘softball connection’ with James Gregg [the division’s schedule and production coordinator].”

Perhaps because the team functions as a great social outlet for so many at Juilliard, its tenor is consistently positive and light-hearted. When asked about the team’s low profile around the School, most—like Gregg, a founding member—pointed out that, despite the lack of chatter around the water coolers, the senior staff and administration have been behind the team from the beginning. “Support from the administration,” said Gregg, “has really been wonderful the past couple of years. Their generosity and willingness to come out and root us on has really been spectacular.” At the final game of the regular season on September 14 (against the Manhattan School of Music), the sidelines were crowded with cheering friends and co-workers, and Jon Rosenhein, vice president of finance and administration, played a great first base. (The team ended the season with a record of nine wins, two losses, and one tie.)

The team’s loudest cheerleaders seem to be the players themselves, though. Prop Shop supervisor Kate Dale, also a team member since the first season, had never played before joining the squad. Bolstered by her teammates, she plays with enthusiasm and is often noted as one of the most improved players on the team. Harpsichord doctoral student Alexandra Snyder also talked about the level of encouragement within the team. She, like Dale, had little experience before joining, but has grown in skill and confidence since 2006 and credits her teammates, explaining, “If you do something great to help the team, you have 10 people high-fiving you and giving you props—and if you screw up, you have 10 supporters helping you keep your spirits up.” An environment where warm smiles and genuine encouragement reward effort and enthusiasm regardless of the outcome­­—especially on a winning team—is a relief after the intensity and perfectionism required in one’s work environment at Juilliard. The noises of the game may provide a beautiful background, but the true music on the Juilliard softball field is laughter.