The Ties Between Music and Dance 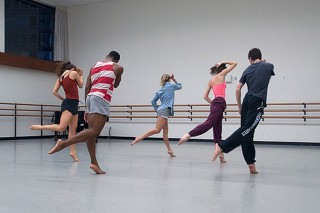 (Photo by Photo by Jeffrey Cuyubamba)

ChoreoComp is the annual collaboration of six third-year dancers and six composers who are asked to zoom in on the relationship between music and dance. Instead of choreographing to a finished score or writing music for an existing dance, they develop two parts of one idea simultaneously. Both a class and a production, ChoreoComp (or, more officially, Choreographers and Composers) is taught by Janis Brenner, Jerome Begin, and Daniel Ott, and this year’s performances take place on November 16 and 17.

Sprawl by choreographer Eve Jacobs and composer Max Grafe is one of six works that will be presented as part of this year’s ChoreoComp performances on November 16 and 17. Featuring (from left) Devon Lodge, Nehemiah Spencer, Tara Langdon, and Ruth Howard, the piece was inspired in part by Jacobs’s summer work at an organic farm in Oregon.

(Photo by Photo by Jeffrey Cuyubamba)

Dancing in ChoreoComp works the past two years opened my eyes to a world of choreographic possibilities. Rehearsals that felt more like a playground than a classroom heightened my own sense of creativity. So last May, when I learned I’d be one of this year’s ChoreoComp choreographers, I made a mental of list things to do over the summer to prepare. I need to teach, I thought, to develop clarity of expression. I need to brainstorm, I need to dance all the time, and I need to choreograph.

Instead, I went to Oregon. I spent the month of June doing things that were not on that list. Digging holes, hauling wood, and raking mulch were among my duties at Zig Zag Mountain Farm, an idyllic destination near Mount Hood on the Barlow Route of the Historic Oregon Trail. It was my second work exchange through World Wide Opportunities on Organic Farms. The agreement was that I would work six hours a day, Monday through Friday, in exchange for food and a room (well, room for my tent). It may sound like slave labor, but for me it was a chance to immerse in nature and retreat from city and conservatory life.

On my first day I dug holes—two feet down and six inches across—for fence posts. My first hole took an hour and a half. The soil was full of huge rocks and post-hole diggers are nothing like pointe shoes. Hitting rock meant crouching low and pounding a shovel a foot into the earth, rhythmically chipping away at sediment until I could jostle the rock out of place. Within a few days, however, I could dig efficiently. Much later, when we filled those holes with the fence posts we’d chopped and hauled, I understood my role in the development of Zig Zag Mountain Farm. My hosts had arrived two years before to a junkyard of slash piles and broken glass, but they had a vision of what could be: a mountain retreat and, maybe someday—with the help of volunteers— a music festival site. Westward expansion might have ended when travelers saw the Pacific Ocean, but smaller efforts continue the legacy.

Back home in Chicago later in the summer, I missed the mountains and the scent of pine. I missed dirt and bonfires and ,stomping around with Blackberry Bushes String Band at Skyway Bar. So I went to the library and found as many folk and bluegrass CDs as possible. I listened to songs about mining, frontier, and journeys, and I thought about American history. Without much in the way of maps, Americans moved west with a general notion of finding something better somewhere else. But land acquisition depended on a willingness to step over native tribes. Purveyors of manifest destiny had hungry eyes and bloody hands.

That stack of CDs from the library turned out to hold a treasure, an album by a contemporary bluegrass group called Black Prairie whose dark sound and hypnotizing rhythm embodied my understanding of westward sprawl. I couldn’t stop dancing to it, so I e-mailed a track to Max Grafe, my ChoreoComp partner, wondering if it might work to incorporate it in our piece. His response: “Not too many things are solid in my concept of the piece. I wanted to incorporate some vernacular elements—bluegrass would be particularly fun, and you’ve got me wondering if anybody around Juilliard plays banjo.”

That was a couple of months ago. Max is currently writing a quartet for banjo, viola, contrabass, and piano while I look for ways to weave traditional American clogging into our piece, Sprawl. In one section, the dancers are crouched, pushing and sliding their palms along the floor in a continuous rocking motion. This movement felt viscerally familiar, and I didn’t know why at first.

When one of the dancers inquired about “the digging step,” my mind flew to Oregon— to digging that first hole, crouched low with sun on neck and shovel in earth, relentlessly scooping. The subconscious is amazing—obscure until that moment of reveal. The sensation of digging never left my body, hence its appearance in my choreography. To dig is to search. To search is to hope to find.

I saw farming in Oregon as something separate, but I am taking that word out of my vocabulary. I cannot separate life experience from creative process, nor do I want to. By ignoring the items on the list I made in May, I made space for something new. Though we aren’t stepping over tribes, ChoreoComp echoes the spirit of expansion; we start from scratch and work together to see what we can find.