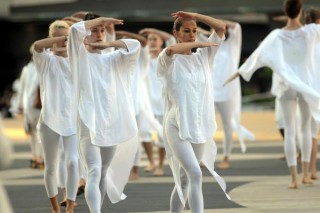 Jacqulyn Buglisi’s Table of Silence Project, choreographed for the 10th anniversary of the September 11 attacks, included 19 Juilliard students among its more than 100 dancers.

After four hours of sleep, I reluctantly rolled out of bed, dressed in white, and walked across the street to the basement of Lincoln Center’s David H. Koch Theater. Gathered there were more than 100 other dancers, 19 of us from Juilliard. We costumed ourselves in flowing white tunics, marked our faces with white powder, and filed outside to the fountain, where we would soon dance, march, and pray to honor the 10th anniversary of the September 11 attacks in Jacqulyn Buglisi’s Table of Silence Project.

I had initially avoided signing up for this project, thinking it unwise to be present at a large gathering with political implications on 9/11 in New York. As the day drew closer, however, I read an article in The Atlantic called “About That Day: A diary of 9/11” by Rhett Miller. I read of his skepticism, his shock, his postponement of a planned wedding proposal on this day, and his frantic escape from a crumbling quarter of New York City.

Ten years ago today, I was a fourth grader at an elementary school outside of Chicago. I had a slim understanding, if any, of what was going on and why all my teachers were crying. Besides increased airport security, I can’t say that the event altered my life even once I was old enough to understand. I knew no one who was hurt in the attacks, nor did I have friends who had any loved ones harmed in New York, at the Pentagon, or in the fields of Pennsylvania at the crash site of United Airlines Flight 93.

After living in New York City for a year, however, I have a new sensory connection to the city, its significance in the world, and its diverse population. As the anniversary drew nearer, I started to feel that perhaps I could fill the hole of sorrow and compassion growing inside me for 9/11 and other acts of terror that appear in the news every week. The thought that I could fulfill a civic duty through dance, which I study so consistently on a technical level, became inspiring. Despite an e-mail from my dad that I might “wish to be vigilant and reconsider (my) plans to be part of a public demonstration,” I swallowed my reticence and signed up for the project.

Due to the volume of participants, limited space and time, and the array of levels represented, rehearsals (including one that took place outside between intervals of pouring rain) were tedious, specific, and repetitive. But the sense that we were giving our time and patience to the determined rehearsal directors, Terese Capucilli of the Juilliard Dance Division and Jacqulyn Buglisi of Buglisi Dance Theater, made the process more meaningful. Both Buglisi and Capucilli trained with and danced for the revered choreographer Martha Graham (who taught at Juilliard from 1951 to 1977). They represented her well by referring to us (the dancers) as angels, as beings so grounded in our humanity that we could represent that compassion and solemnity in everyone. Jacqueline and Terese thanked us hourly for our presence, cooperation, spirit, and camaraderie (even though many of us had just met each other).

Before long I realized that the rehearsals had become a profound example of the collaborative spirit Juilliard aims to instill in its students. I found myself in a room with a choreographer, dancers of different backgrounds, musicians, and artists. Paula Bennett, a Juilliard accompanist in the Dance Division, played the consistent rhythm of the processional. A vocalist sang, wailing at times; a flutist played eerie tones. And Italian artist Rosella Vasta designed the white terra-cotta plates held by the dancers.

Despite my physical lethargy when I got up today, my mind filled with questions. Who would show up so early on a Sunday? Would people be too scared to attend? Would the performance be as moving as we all hoped? Was there anything to be afraid of? If not, why were all those police cars surrounding Lincoln Center? And so on.

We ran through the performance once that morning before we were scheduled to dance. Passersby clutching coffees stopped—and seemed fascinated. When we returned to the fountain at 8:15, I was gratified to find crowds gathered around it—hundreds of people had woken up early to share this prayer for peace with us. Men and women behind video cameras, news crews, security guards, Juilliard students and faculty, and many other New Yorkers were all there.

As we walked onto the plaza together, I focused on the white tunics of the dancers to my right and left, two of my closest friends and fellow second-year dancers at Juilliard. The sun was in our eyes as we raised our arms wide in prayer, grandiose architecture and a crisp blue sky surrounding these 120 humbled dancers. When my focus panned outward, to the circle of watching New Yorkers, I witnessed strangers crying—some in sorrowful memory of terror, some, perhaps, in gratitude for the effect art can have on a community.

8:46 a.m. The people watching raised their arms with us during a minute of silence. No matter to whom or to what, we all prayed together, gathered together, hoped together, and remembered together. Passersby stopped to join us. People cried, hugged, and then filed out.

When I woke up today, I planned on going back to sleep after the performance. But when it was over, I was filled with more thoughts than I could handle, so I came back to the fountain to reflect.  For 30 minutes this morning, the plaza was sacred, but as I pondered, it returned to its daily state. Men in suits and women in high heels and brightly colored skirts spilled onto the plaza for Fashion Week. Tourists posed for pictures, couples strolled, businesspeople made phone calls. Despite warnings that something bad could happen in New York or Washington today, we were alive. The Table of Silence Project invited New Yorkers to gather, commiserate, and commemorate. Some cried in sorrow, others in appreciation of life and art and community. I feel honored to have participated in an event of such beauty, and I am thankful for this simple reminder of why I am proud to be a dancer.