Each year, Juilliard’s Vocal Arts Department showcases some of its most promising singers in a special solo appearance at Lincoln Center. The winners of this year’s Vocal Arts Honors Recital, mezzo-soprano Cecelia Hall, an Artist Diploma student, and baritone John Brancy, a fourth-year undergraduate, will be featured on a duo recital October 6 in the Peter Jay Sharp Theater. 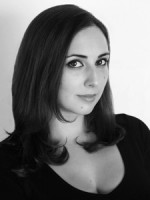 Hall and Brancy were chosen for the recital after being nominated by Vocal Arts faculty and auditioning in front of a panel of distinguished judges: soprano Amy Burton; Matthew Epstein, former director of Columbia Artists Vocal; and Kevin Murphy, director of music administration at the New York City Opera. Once they were named the winners, Hall and Brancy chose the repertoire they wanted to perform together with their pianists, students in Juilliard’s collaborative piano department.

Hall will begin the evening with songs from the cycle Vignettes: Ellis Island by American composer Alan Smith. As Hall explained in a recent e-mail to The Journal, the texts for this cycle are extracted from the oral histories of immigrants who traveled through Ellis Island in the early 1900s. With them, Smith creates “little snapshots of people’s lives.” She added, “They are very inviting, and I like the idea of welcoming the audience with a set of songs in English.” Interestingly, Hall also happened to meet the composer this past summer at the Tanglewood Music Center.

Her program continues with two collections of songs she has been yearning to sing for some time. First comesChansons de Bilitis by Claude Debussy, which “tell the story of a girl in an intense love affair, one that starts quite innocently and then leaves her wandering through the snow in search of her lost love.” Hall feels that Debussy is “a master at setting the French text. The way he colors certain words is so touching and vulnerable, just like the young character Bilitis.”

The first half will close with selections from Gustav Mahler’s Rückert Lieder, which may have “a much wiser and more worldly character about them [than the Debussy], but are equally sincere.” Hall has been haunted by “these incredible melodies” from the moment she heard Lorraine Hunt Lieberson’s recording of them. She remarked, “I have been dying to sing them ever since.” Hall will be performing with pianist and doctoral candidate Erika Switzer, whom Hall describes as a “great pianist and collaborator.” This occasion will mark the duo’s first large-scale project together.

Brancy’s programming choices are equally diverse. In an e-mail message, he said he selected works that were “off my top shelf. That is, the music that is most active in my imagination right now.” Like Hall, Brancy chose American works to open, beginning his part of the program with songs by Charles Ives, Marc Blitzstein, William Bolcom, and Theodore Chanler.

Specifically, Brancy feels a special connection to the Ives song, “The Things Our Fathers Loved,” and hopes it will“build an immediate bridge with the audience. As I sing it, I’ll get to know them and the energy they have brought into the hall.” Moreover, “It’s a very personal song for me because of its belief in America. There seems to be a lack of true patriotism these days, and I would like to try and encourage new feelings. We live in a beautiful country that still has—and always will have—many opportunities to offer us.”

In addition to the American songs, Brancy will be performing Deux Epigrammes by Maurice Ravel, as well as five songs by Erich Korngold, which are a “particular favorite at the moment.” Brancy explained, “I feel that each of the five songs has something really special that allows us to explore an unusually wide range of color. The broad dynamic range of the music and the richness of the piano writing bring the program to a real climax.”

Pianist Renate Rohlfing, a master’s student, will be performing with Brancy. The two have been frequent performing partners since Rohlfing arrived at Juilliard last year. For Brancy, the nature of their collaboration is paramount. “The energy and artistry of a pianist has everything to do with the successful performance of a song. Our partnership is the key to the recital.”

In addition to the interesting programming, another aspect that makes the Honors Recital unique is its “blind” audition process. That is, the panel is unaware of a student’s program of study or year at the auditions. This allows for an experienced performer like Hall, who is making her Metropolitan Opera debut this season, to be paired with an emerging, young talent such as Brancy. However, despite their age difference (she turns 26 this month, he 22 next month), both artists view their time at Juilliard as seminal to their artistic lives and careers.

Hall, who also completed her master’s degree at Juilliard, said she is still awestruck over the resources and opportunities Juilliard offers. “I can’t even wrap my mind around how much I have grown as a singer in my time here,” she said. “The faculty is out of this world! I feel so much more confident in my foundation as a musician because of my time here.”

As someone who had no formal training until entering Juilliard as a freshman, Brancy really sees Juilliard as the time and place “where I found myself. If I could sum up Juilliard in one word it would be ‘growth.’ We enter Juilliard as children of Art. As we are nurtured here, we gradually become ready to strike out on our own with a clear path ahead, and hopefully, with a strong sense of who we are.”