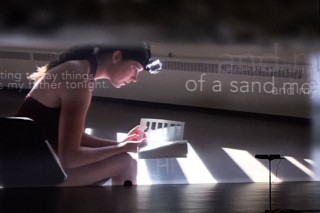 Single words from a 13th-century poem, each written on an aspen leaf. The poem celebrates nature. The members of the audience watch video of the leaves and use gestures to control and change the size, text, and the animation on a 30-foot screen.

Talk about mixing old and new. In the fall of 2012, these were components of an interactive installation that choreographer Joan Karlen (B.F.A. ’80, dance) presented at the IDEA (Interaction, Design, Experience, and Audience) Summit at Canada’s Banff Centre. She had just completed a six-week film and media residency at the center, and was excited about the chance to learn more about interaction design after 15 years of creating dance and multimedia projects.

The residency, she wrote in her artist statement, “gave me time to ask—and begin to answer—how moving layered video scenes might [reveal] a new array of stories altered by audience participation and interaction.”

The work consists of 19 video poems she designed with a dancer. In addition to the 13th-century poem, “The Flap of the Wallet” by the Sufi mystic Rumi, she also used Simon F. Ortiz’s “My Father’s Song.” Working with an interactive software developer, she designed code for a Kinect (motion-sensing device developed for Xbox video game software) video box, with the result, she wrote in the artist statement, that “each 16-minute cycle of these video poems appears in a new, randomized order; the work is never the same twice.” She also wrote about how it works: “Once the Kinect recognizes your body, your right and left hands control the text colors and pattern; your proximity to the Kinect controls the video size; the proximity of your hand and arm getsures in relation to your torso control text and leaf animation size and screen location.”

“The technology layer is very light—but it gives the participant a chance to enter this world,” Karlen said of the installation in a recent phone interview with The Journal. In October, it was at the Oklahoma Dance Film Festival and she watched as, variously, a 3-year-old, a drummer, and a man in his 70s all interacted with it. “There’s something magical about it.” She’s still submitting the work to festivals and conferences—and hopes one day to see it projected on an urban façade so passersby can participate.

Karlen was on sabbatical when she created the installation; she’s a professor of theater and dance and the dance program coordinator at the University of Wisconsin-Stevens Point, where she teaches interdisciplinary studies, dance composition, and dance technique. She dates her interest in using technology in her work to her graduate school days at New York University, where she took a course in the psychology of creativity, and made a documentary about choreographers and visual artists discussing the creative process. “I taught myself to edit and the process probably took about 80 hours, but it seemed like it went by so easily,” she recalled. Intrigued, she started taking video production courses.

Karlen grew up in Stevens Point and started studying dance when she was in second grade. She decided to come to Juilliard in part because of its “beautiful international community—I remember being there for my audition and hearing four or five languages spoken in the elevator,” she recalls. Another lure: “It’s very important to me to be in a community of artists with the opportunity to collaborate.” Karlen started performing with small companies and Off Broadway while she was a student and also began choreographing. “I realized the power of being able to draw out in other dancers the aspects of themselves that were waiting to be invited out,” she said.

While Karlen didn’t intend to go into academia, in 1988 she took a job as a three-month replacement at the university, then met her future husband, a bass player, and has never left. “I found I really loved teaching,” she said, “and I also realized that I could be based here but continue working regionally, nationally, and later internationally.” Her interdisciplinary seminar addresses how dance interfaces with other disciplines “so when dancers leave school, they are already thinking about how dance interacts with the world and can become important contributors and collaborators.”

Karlen’s work in video—and now interaction design—has continued to inform her choreography. “One of the things I love about technology is that I can continue to work on it after the dancers have gone home—it’s not time and space sensitive,” she said. Another benefit is that it allows her to keep breaking down barriers between disciplines. “I think being well-rounded in terms of artistry and process is important as a human and certainly as an artist,” she said. “The thing is for young artists to get to know themselves very well so they can be successful in any career go into.”