The Alessis and the Met: A Family Affair 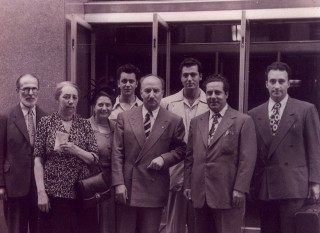 Joseph Alessi Sr. is on the far right, his son writes, next to Gino Cioffi (principal clarinet of the Metropolitan Opera Orchestra, 1944-50). If you recognize any of the other people in the photo, please let us know at journal@juilliard.edu or (212) 799-5000, ext. 340.

(Photo by Courtesy of Joseph Alessi)

Recently Barbara Jöstlein Currie (B.M. ’98, French horn), a hornist with the Metropolitan Opera Orchestra since 1997, interviewed faculty member and New York Philharmonic principal trombonist Joseph Alessi about his parents, trumpeter Joseph Alessi Sr. (’45, trumpet), and soprano Maria Leone Alessi, who met while they were performing at the Met. This Q&A is excerpted and adapted from an interview that originally appeared on METOrchestraMusicians.org. It is reprinted with permission.

Your father was principal trumpet of the Met for almost 15 seasons. How did he feel about his time at the Met?

If you look back at that period, the pay was really not that much and many musicians had to do other things to make ends meet. I think he enjoyed his time there very much and, of course, he met my mother there. He talked about playing poker during long rests in performances—I believe that still exists today. He never stopped practicing—he really loved the music—but I think he enjoyed the camaraderie most of all.

As a child, did you hear your mother sing often?

My mother was very involved with her local church choir where I grew up in San Rafael, Calif.. Many times, she would be the featured soloist. While she did not have a professional career after the Met, her love of singing continued. I remember on many Christmas Eves hearing her sing “Ave Maria” beautifully. I would often hear her vocalize and go over her exercises. She had a wonderful sense of phrasing from the heart. I am so happy to have a recording of her preserved on my website so that everyone can hear what an amazing voice she had.

Did this have a strong impact on your concept of sound and musical phrasing?

She would listen to me practice and occasionally offer me some advice. When she sensed frustration on my part, she would interrupt me and tell me, “Keep it singing!” This always helped—it made things considerably easier for a teenage brass player. To this day, I model my phrasing after hers.

Did she ever sing opera again?

She did some recitals and even appeared on local television but her opera days were finished. I think she knew that it didn’t get any better than being onstage at the Met with Zinka Milanov and Richard Tucker. She made the choice to raise a family. I know she missed her Met days, but she never looked back and devoted her life to her family and her church.

Did you and your brother [jazz trumpeter and composer Ralph Alessi] hear your father practicing at home or playing professionally—and how did this impact your musical lives?

Dad was a real brass player. He faithfully warmed up every day and, like so many other brass players, he liked to warm up in front of the TV watching his favorite sports event (usually the Giants or the 49ers). He had a big, fat sound and enjoyed teaching almost more than playing. My father had this way of teaching where you felt like it was the way to play. This included the formation of the embouchure, how to practice, and an incredible feel for basic rhythms.

Your grandfather, also named Joseph Alessi, was also principal trumpet at the Met, from 1920 to 1927. Do you have any stories from or about him?

I’m very sad to say that I actually do not remember him. Of course I met him when I was about 2 or 3 years old, but he tragically died traveling home after teaching all day at the Manhattan School of Music. He got off the bus in Norwood, N.J., and was struck by a car. He was probably 80 years old. I was told by my father that he was a great cornet virtuoso in his hometown in Sicily. I met several of his old students who resided here in New York. They all told me that he was a very caring teacher and that he went out of his way to help them all. Steve Dillon (the owner of Dillon Music) looked up some information about him when he was cornet soloist at the old Rialto Theater. There were many New York Times reviews about his performances that I have saved.

Tell me about your father’s involvement in developing the straight and Jo-Ral mutes [which quiet brass instruments and change their tone color].

[Longtime Juilliard faculty member and New York Philharmonic principal trumpet] Bill Vachianno [’35, trumpet; faculty 1935-2002] was my father’s teacher and close friend. Bill would often complain about mutes that never played well in the low register. Well, he found himself faced with playing the American premiere of the Shostakovich Piano Concerto No. 1, which has a very prominent, and occasionally low, solo trumpet part. At the time my father was living pretty close to Bill, so on the weekends, they experimented with making mutes from scratch. Frustratingly, they never could make one that played consistently across all registers. They had all of these mutes on a shelf, and one day, after many, many failed attempts, the shelf became dislodged and all the mutes fell to the floor. One landed in such a way that it created a flat spot on the bottom of the mute. They picked it up and tried it and, voila, it worked! The mute became one of the best-selling trumpet and trombone mutes in the world. During their playing career, it was very difficult for them to keep up with demand and they ended up selling their designs to [what’s now Conn-Selmer and was then called Leblanc]. My father always regretted his decision to sell and decided to develop another line of mutes. He asked one day what he should call this new line of mutes. I joked, “Name it Jo-Ral, after your sons!” He liked it and went with that!