You know the digital signs on 65th Street; the information on the Juilliard online calendar; and the school’s Facebook, Twitter, Instagram, and Pinterest posts? Jessica Epps oversees all of them. A North Carolinian who was born and raised in Matthews, a suburb of Charlotte, Jessica earned her bachelor’s in flute performance from Appalachian State University and her master’s in both flute performance and arts administration from Florida State University. Three years ago, she went completely against type and moved to New York City without a job. “I knew I wanted to work in the arts and that this was the best place to do it, so I thought I’d pick up a short-term job while I looked for the job—even though I’m not the type to take life-changing risks,” she said. She ended up at Juilliard almost immediately, first at the Store as a sales associate, and three months later in Communications, as the digital marketing assistant. “Taking a daunting and precarious step helped me find out what I’m made of.” 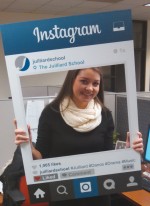 What do you remember about your first day?
My first day was a blur, but I do remember thinking how amazed I was to be working at Juilliard—a place I had admired since sitting in the flute section of fifth-grade band. Even three years later, when I walk across the plaza to work, I often think how surreal it seems.

What’s one of your favorite Juilliard memories?
For last spring’s gala, I got to live-tweet from backstage. It was so amazing to meet so many of the school’s prestigious alums, and witness such incredible performances from behind-the-scenes. It was also fun to dress up and enjoy the fancy party with my colleagues afterward.

What Juilliard job would you like to try for a day?
Costume Shop, definitely. I used to draw and design dresses when I was younger, and I’ve always been fascinated with costumes, especially from films and other time periods. I even have a Pinterest board devoted to costumes.

What's the strangest job you’ve had?
I was trying to save as much money as possible before moving to N.Y.C., so I took on an extra seasonal job as a Santa’s Helper at the mall. You won’t believe how many people wait until Christmas Eve to bring their kids to see Santa—insane! And, before you ask—sadly, I did not get to wear an elf outfit. I think I would’ve enjoyed it more with curly shoes à la Zooey Deschanel in Elf.

What’s the craziest day at work you’ve ever had?
The day of the Renée Fleming (’86, voice) live-streamed master class—I was live-tweeting and the website crashed—I.T. saved the day though (thanks, guys)!

What are the three most popular things you’ve posted on social media here?
It’s hard to narrow it down to just three, but the video of the Juilliard Trombone Choir’s performance of the national anthem at the N.Y. Rangers game in March has reached over 1.5 million people with 460,000-plus views, and counting. Our followers also love our dance photos, behind-the-scenes videos, and anything with the Juilliard Penguin.

Which three posts have surprised you most in terms of how they’ve done?
The Trombone Choir video stats are unlike anything Juilliard’s social media front has seen before—truly amazing! I was also pleased with how our first-ever Twitter takeover with Thomas Hampson went. So many thoughtful questions, and his answers were great even with a 140-character limit—not an easy task to undertake in a short timeframe.

If out of the blue your boss said to take the day off, what would you do with your free time?
I recently moved to a new apartment with an N.Y.C. rarity, but a Carolina girl necessity—a private backyard. It needs some work, so I’d probably spend the day planting flowers and enjoying the outdoor space. Either that, or an old-movie marathon; I love Alfred Hitchcock and anything with Bette Davis.

As a musician, how do you balance your job and your artistic endeavors?
I’m not currently pursuing any musical activities, but I do still enjoy playing, even if it’s just for myself. Over the summer, I like to make a Summer Friday resolution to practice, and it’s nice to revisit old favorites, or explore new pieces just for fun without the pressure of having to prepare for performance.

What other pursuits are you passionate about?
I am a self-taught graphic designer, and I create marketing materials for the Tallahassee Symphony Orchestra, which I interned for as a graduate student. It’s a terrific organization to work for, and I love being able to help promote its exciting programming while also exploring my own creativity and figuring out new features of Photoshop and InDesign.

What’s your favorite thing about New York City?
I love that there will always be something I haven’t experienced yet, and I love that you can get on a train and end up at the beach.

What are you reading/listening to/watching/following?
I’m currently reading Jane Austen’s Persuasion; listening to the Civil Wars (and refusing to accept their breakup); eagerly anticipating the next seasons of Sherlock and Downton Abbey; and everything social media, of course. I’m a Pinterest addict!

If you could have tea with three Downton Abbey characters (present or past), which would they be and why?
Matthew Crawley because I miss him so much; Mr. Bates because I still can’t figure him out; and the Dowager Countess, of course, because I love her snarky one-liners.