Hey everyone! It's Molly Yeh from 2008 on an assignment unlike any of my other Journal stories: I'm interviewing my present day self about a fun thing that's happening this month—apparently I am about to release a book! I have no idea what it's about—The Journal was just like, “Hey Molly, hop in this time machine, we need someone to interview the 2016 you and we thought it might yield the juiciest details if you just did it yourself” and I was like, “cool, I'm so glad that time machines exist in 2016, I just need to make sure I'm back in time for my timbale lesson this afternoon.” I have so many questions: What is this book about? Are we blonde? Are we employed? Where did we go to grad school and OMG are we married to <3 Eric <3?? Here I go, wish me luck. 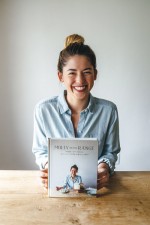 Molly Yeh's Molly on the Range (Rodale) comes out this month.

2016 Molly: Not quite. We're a full-time food blogger! We still play percussion a bit, various gigs here and there, but that gets a little complicated because we live on a farm outside of Grand Forks, N.D., and we have a flock of chickens! And we married Nick Hagen!

2008: Stahhhp. The silent trombonist who we've talked to exactly once? Who's been to less parties in his entire lifetime than we went to in one night of orientation? Come on, none of this can possibly be true.

2008: O.K., so all I gotta do is read this book and then I'll know how I go from shedding the Porgy and Bess xylophone part to being a chicken mom at the North Pole?

2016: Yeah, basically. This story is told through recipes, a lot of them, because once we move out of the dorms next year and get a kitchen of our own, we become obsessed with food. We discover how rewarding it is to bake a cake—and challah! And pretty soon Gordon Gottlieb [longtime percussion faculty member] is going to start punctuating our snare drum lessons with tales of crazy restaurants downtown and $26 burgers that become the reason we spend all of your work-study money. We start taking gigs in odd parts of the city for the sole purpose of trying out hidden ramen joints and new pizza spots afterward. And then when we finally grow out of this phase of partying until the sun rises and start craving a slower way of life with less traffic and pizza parlor options, the stars align, and we realize that Nick isn't a total weirdo, he says, “Hey, want to move to my family farm in the upper Midwest where generations of Hagens have farmed before me and where one town pizza parlor exists?” and that sounds like the best idea ever! So we move there and start cooking and blogging up a storm, making recipes from Mom's Jewish side, Dad's Chinese side (because spoiler alert: babka and gua bao don't exist up here unless we make them from scratch), and all of the new-to-us foods in the Upper Midwest, like Cookie Salad and Hotdish.

2008: So you're saying that we don't perfect all of our orchestral excerpts, graduate, and then pursue a master's degree in Boston where we become smelly practice hermits and then win an orchestra position in a midsize town and then one-and-a-half years later win another orchestra position in a large city and then get proposed to by Eric on the day that we get tenure and have a wedding on the Tanglewood grounds?

2008: Should I just drop out of school now and move things along then?

2016: No, don't do that! Pay attention to how hard you need to work here to keep up with the other percussionists, allow yourself to feel the crippling guilt that comes from getting a B in percussion ensemble, and when Gordon arrives at our L'histoire lesson with tales of snagging a reservation at Momofuku Ko, take notes. Become the best practicer that you can, because soon we'll use that same method of working to grow a blog and write this cookbook. The North Pole is basically one big practice room. At Juilliard, we're learning how to work. Or as the dancers say, “werk.” And so much of what we'll learn here we'll be able to apply to photography and recipe development. Except for replacing timpani heads; you can give up on that now.

2016: And one more thing: that timbale lesson we're headed to? Bring tissues, we're going to cry in it.

Plus check out Molly in the new Life After Juilliard video series at juilliard.edu/lifeafterjuilliard.

Here's a recipe I created for The Journal that can be made without any fancy tools, just a microwave and a mini fridge, so it's perfect for a dorm. These treats are brought to the next level by way of marzipan and almond extract.

Tools
A knife (a butter knife will do), a large microwaveable bowl, a big spoon or rubber spatula, a measuring cup, parchment paper

Clues
Place the butter and marshmallows in a large microwavable bowl. Microwave on high for 1 minute and then give it a good stir. Microwave for additional 30-second increments, stirring after each, until smooth and completely melted. Stir in the salt and extract and then stir in the cereal, marzipan, and chips. Dump the mixture out onto a large piece of parchment paper. Place another sheet of parchment on top and then use your hands to pack the mixture firmly into a square, about 8” by 8”. The best Rice Krispies bars are chewy and dense, not loosey-goosey, so don't skimp on packing the mixture firmly. Top with sprinkles, if using. Let it firm up in the refrigerator for 1 hour. Cut into squares and enjoy!