Rutina Wesley, who plays Tara Thornton on HBO’s popular vampire drama True Blood, never expected to land a big television role so early in her career. The series, which begins its third season on June 13, stars Anna Paquin as well as Juilliard alums Nelsan Ellis and Carrie Preston. Before joining the cast of True Blood in 2008, Wesley (Group 34) performed a variety of roles in film, theater, and television, including the lead in the movie How She Move and opposite Julianne Moore on Broadway in David Hare’s play The Vertical Hour. A native of Las Vegas, Wesley earned a degree in theater performance from the University of Evansville and continued her education at Juilliard in 2001. In a recent interview with third-year percussionist Molly Yeh, Wesley, 31, spoke about her background and career. 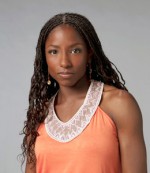 How She Make a Movie

What made you want to become an actress?
I always loved being on stage. Both of my parents were dancers, so I grew up in the business. When I got to high school [Las Vegas Academy of International Studies, Performing and Visual Arts], I got to major in both theater and dance. I love playing characters and telling stories and moving audiences. I decided to go to college and focus on acting because you sort of can’t do both. My dad was like, “Well don’t forget about your feet!” ’cause he’s a tap dancer … but I was really excited about acting. It was that performing arts high school that made me into the actor that I am.

Was there anybody who told you that you needed a backup plan?
Yeah, my grandmother. She was like, “Well what about being a nurse?” and I was like, “Yeah, yeah … I’ll think about that.”

Can you talk about your character on True Blood?
Miss Tara Thornton—she’s very defensive, but her defenses are definitely earned. She grew up with an abusive childhood and luckily her best friend, Sookie Stackhouse, and Sookie’s grandmother, Adele Stackhouse, were able to take her in save her from her mother’s alcoholism. Sookie sort of saved the day for [Tara] as well as her brother Jason, who [Tara] sort of fell in love with because he was sort of her hero. She’s a delicate flower on the inside. She’s a child who’s in seek of validation and attention and love and she doesn’t always know where to get it.

When you were at Juilliard did you ever see yourself pursuing a job like this?
Not so quickly. It was a surprise but I worked really really really hard to get where I am. [I’ve] always been preparing myself for this moment and I always get a little choked up about it because it’s sort of surreal that it actually happened and that I’m actually living my dream.

What is it like working with two other Juilliard alums—Carrie Preston and Nelsan Ellis—on the show?
We have so much fun together. Especially with Nelsan because he was in a class ahead of me. All of our scenes together are on fire because we know each other. He always keeps me on my toes and it’s comforting to know someone when you’re walking into a situation where you don’t know anyone. [Carrie has] always been so sweet and such a kind spirit and our friendship has also grown on the show. I love working with them both. It’s great because we’ve had the same journey.

Where do you see your career in 10 years?
I would love to do some rom coms, some action flicks. I don’t have expectations because you have to have patience and know that what is yours is yours and it will come when it’s time, and you have to hold onto that so you don’t get defeated. Each year I look forward to what’s ahead for me and I can’t predict the future, but I know that there’s a lot of things out there that I want and I know that if I’m patient, hopefully they will come.

What do you do outside of acting?
I love to go karaoke-ing. I like to go the batting cages with my husband … and I like to play with our cat, Anana. I like to hang out with my girlfriends when I have time.

What can we look forward to on the upcoming season of True Blood?
We’ve got werewolves. There might be fairies, we have new vampires coming into town. For Tara, she’s gotta do a lot of grieving … and then she may have a new love interest. The cool thing for me about this season is that I get scenes with everybody and that’s cool because usually you don’t get to see each other’s work until the end.