From Opera to Online Comics

Tenor-turned-C.E.O. David Steinberger has been dubbed the king of digital comics by First Comics News for his groundbreaking downloadable apps. A Juilliard Vocal Arts graduate (he studied with Marlena Malas and earned his Artist Certificate in 1998), Steinberger enrolled at New York University’s Stern School of Business. In 2007, before completing his M.B.A., he launched what is now the country’s leading digital comic distributor, comiXology. 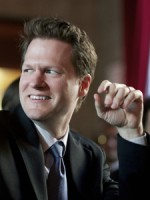 David Steinberger applies the lessons he learned as a vocal arts student to his thriving digital comic business.

What exactly is comiXology?
We’re like an iTunes for comics: You can buy comics on your iPhone, your iPad, or on the Web and read them.

Have you always been interested in comics?
I was a collector in the ’80s, but in the ’90s I had almost entirely given up the habit.

What made you want to go back to that?
I had been working for investment banks since graduating from Juilliard, and my parents made me come to Kentucky and get my comic books. I was going to catalog them and sell them, thinking I could make some money, and it looked like there were no good software programs for doing that type of thing.

Why did you decide to go to business school after having gotten a degree from Juilliard?
I was talented enough to sing well and do well in school … and as long as there was something in front of me, like recitals or performances, I practiced a lot. … What I found out when I got out, [though, was that] I just didn’t want to run around the country and work as hard as I needed to work to really do it. It was a pretty tough couple of years figuring that out, feeling very guilty about not trying to make a career out of singing. In the meantime I had to get work so I could live, and I started working for investment banks and making presentations for them and naturally made my way up the corporate ladder. … I still have a church gig, so I sing on Sundays in Brooklyn. And I still love to sing.

What from your Juilliard education has helped you in the corporate world?
The degree was all about performance, understanding what you want to communicate. With songs it was [about] understanding the language, the perspective, the background of the poetry, and becoming confident in making decisions about how you want to communicate, whether that’s how you turn a phrase or make dynamic or color choices in the voice. … That can be applied very strongly to creating what they call a pitch presentation for business, [which] has the same kind of preparation … and so I’d say that even though it’s not so much about the soul and the heart, it was still really useful. … There’s no question that the many years of singing and recitals and being a part of opera helped me get in there and be an effective communicator under pressure.

Are there any artistic aspects of your work that are related to what you learned at Juilliard?
To prepare a comic book to be read on an iPhone, we have to make a lot of editorial decisions about how the comic flows … Storytelling and communication are preserved, and that is probably one of the things we’re most well known for: the respect we give the comics. That also applies to music. You can take a Schubert song and [just] learn the notes and the words, or you can take a Schubert song and learn about when it was made and what was going on in the composer’s life and what his perspective was—you can really dig into the music and try to see what these harmonies and changes are communicating and which [vocal] effects you can use. That’s exactly what we’re doing with the comic books: Rather than making sure that every little piece of the page gets seen, it’s much more important that the story is preserved.

Do you ever wish you had stuck with singing and pursued a singing career?
I miss that kind of interaction with other people on the stage and the music. I don’t know that I would say that I regret it, because it just turned out it wasn’t for me, but certainly when I go to the Met, I feel a little twinge of “yeah, I wish I could be up there."

But they’re not the king of comics …
[Laughs] Yeah, that’s right … For singing I would have wanted to be the best and there was very little chance of that happening with the sense I had of not wanting to practice. [Knowing] I’m really never going to be singing at the Met is disheartening, but there’s also this sense of wanting to be the best, and so there’s some satisfaction in that people perceive [comiXology] that way. But if I could skip all the work and be a great singer, I’d take that in a heartbeat.