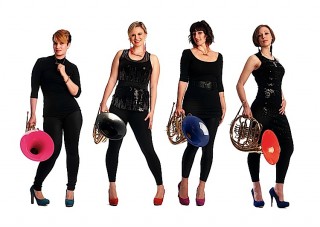 When the French horn foursome Genghis Barbie makes one of its frequent college appearances, after the master classes and the recitals, they often speak to entrepreneurship classes at which, co-founder Danielle Kuhlmann (B.M. ’07, French horn) says, “we divulge the secret of business, which is that we love what we do.”

Formed in 2010, the self-described “post post-feminist feminist all-female horn experience” is clearly succeeding at what it does. The quartet—which also includes Alana Vegter (M.M. ’07, French horn) and  Leelanee Sterrett, alumni of the Academy, the joint Carnegie Hall-Juilliard teaching-performing program; as well as Rachel Drehmann—has risen to fame by performing arrangements of rock and pop songs in addition to classical pieces. In May, not only were they the soloists in the world premiere of Elizabeth Kelly’s Not An Old-Fashioned Love Story at Carnegie Hall, they also got their broadest exposure yet—though with decidedly mixed results—when they appeared on America’s Got Talent. Kuhlmann chatted about it all with Journal editorial assistant Molly Yeh (B.M. '11, percussion).

For the people who haven’t had the pleasure of seeing a Genghis Barbie performance, describe the vibe.
Genghis Barbie performances are an unadulterated musical adventure. We like to have a lot of fun. We want people to just react however they’re going to and not tell them they should feel a certain way about anything. We’re doing what we do, we’re having a good time doing it, we hope they’re gonna have a good time too.

Whose idea was Genghis Barbie?
We were all at Alana’s bachelorette party a few years ago, and I looked around at all of us thinking, we’re four friends who all do the same thing. We’re all freelancers and we actually like each other. And then many months later, this idea popped into my head that we should start a horn quartet and play pop music.

What’s with the name?
Twenty-something years ago my dad’s friend’s daughter, who was about 5, played with Barbies and learned about Genghis Kahn in school, and she drew a comic strip called Genghis Barbie. My whole life whenever anyone talked about names for rock ’n’ roll bands, I’d say, “well I have the best band name ever—it’s Genghis Barbie.” When we came up with this group we had a couple of names before that were slightly more inappropriate, so we decided to stick with the more family-friendly Genghis Barbie.

So on America’s Got Talent, you got buzzed off the stage almost immediately. Can we discuss that?
Ha ha! What was most shocking to me about it was that [the judges] wanted to be unable to listen for more than five seconds. And the idea that those people or any person can judge whether something is worthwhile within five seconds is frightening. People are constantly throwing out these phrases like “we need orchestras, we need classical music.” That’s fine, but no one really talks about why, and I’d always questioned whether that was actually true. But after that show, I think there is incredible value in challenging yourself to experience “high art” or “abstract art” or “complicated art” or “complicated conversation” or “complicated food” or complicated anything that lets you learn something about yourself and think about how to be a good person.

Who are your role models?
I can’t speak for the group, but we recently met and had a photo op with Sarah Willis, who’s one of the horn players in the Berlin Philharmonic. She’s an unbelievable horn player but she also has a lot of personality and isn’t afraid to be a woman or a girly girl. She’s the only woman in that brass section—and she’s faced the challenges of making it in a man’s world.

What does the future hold for Genghis Barbie?
We’re working on our third and fourth discs, which are set to be released in February. And we hope to do as much as we can in schools. It’s important that people see something out of the box and people doing something they love. It’s not necessarily that what we are doing is unique or different, it’s that we care about what we do and hope to inspire other people to find the thing that they love to do.