Before becoming a member of the Mark Morris Dance Group, in 1998, John Heginbotham (B.F.A. ’93, dance) was a self-proclaimed “dance whore.” Now based in Brooklyn, this native of Anchorage has danced in the companies of Susan Marshall, Pilobolus, John Jasperse, and Ben Munisteri, and his work as a choreographer and director has been seen at, among others, the Baryshnikov Arts Center, Joe’s Pub at the Public Theater, Dance Theater Workshop, the Inside/Out series at Jacob’s Pillow Dance Festival, the Museum of Modern Art, and the New York and Toronto Fringe Festivals. As a teacher, Heginbotham works regularly with members of the Brooklyn Parkinson Group, and is a founding teacher of Dance for PD, which offers dance classes for people with Parkinson’s disease. Though Dance for PD is based in Brooklyn, its network of partners and associates extends to more than 40 communities around the world—and now includes a satellite location at Juilliard with classes that operate several times a year. Heginbotham recently sat down to discuss Dance for PD and more with D.M.A. candidate Toni Marie Marchioni. 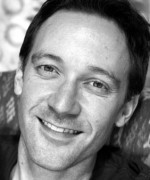 Alumnus John Heginbotham is one of the teachers of Juilliard’s dance classes for Parkinson’s patients.

How did you become involved with Dance for PD?

I do a lot of teaching as a member of Mark Morris Dance Group, and when the company opened a building in Brooklyn, there was a press release that said something like, “Mark is interested in being a part of the community and bringing dance to a lot of different populations.” Olie Westheimer, who runs the Brooklyn Parkinson Group saw this, contacted M.M.D.G., and said, “Are you serious about wanting to be part of the community?” Our executive director Nancy Umanoff said, “If you can guarantee me that one person will take this class, I will offer it.” So in 2001, we started with about five people, once a month. It grew really organically into this very popular class that attracts a lot of members. Now we have 50-plus people taking the weekly class in Brooklyn. It has also spun out into a fitness class, a singing class, a movement lab class, a whole industry. And now finally this year, thanks to our program manager and founding teacher David Leventhal, we have been able to bring the class to Manhattan—to Juilliard—which is really exciting.

What has being involved with Dance for PD been like for you personally?

I have to say, I teach a variety of classes, and this is consistently the most rewarding one because these people are so hungry to move. To watch them take charge of their bodies when they’d lost some control of them, to watch them move, not just in mundane ways, but aesthetic ones, to be part of making that happen, is really deeply fun.

There was a guy in Louisville, Ky., where we taught a master class, who came up to David and me afterward and said, “I used to dance with my wife all the time. We haven’t danced for 11 years. You know, this class makes Parkinson’s fun.” And then of course, we all burst into tears simultaneously. It’s really cool and really important to hear that. It can be pretty powerful stuff.

What are the benefits of a Dance for PD class?

One of the consistent comments that I hear is that people feel the dance studio is a place where they are free to move around and not be self-conscious. It’s one time during the week that they can let go of inhibition.

Nobody is pretending that this is a cure for Parkinson’s disease. But—this is something that I observe consistently—people will walk into the room very locked up in their bodies. And at the end of the class, people are moving more freely, as a whole. Now Parkinson’s disease has some very, unfortunately, predictable aspects to it, and occasionally someone will become smaller in their movements as the class progresses. But as a general rule, the entire level of the class, what they are able to accomplish, is far greater than when the class begins each time. To feel locked up, and then have some key that can unlock you for a little while, is really great.

The other extremely important, maybe most important, aspect of the class is that we’re trying to give people an enjoyable experience. So even if you walk in with a bunch of symptoms and leave with symptoms, for the period of time you’ve been in the room, one hopes, you have had fun.

One more thing I would say about the class is that I don’t think of it as therapy even though it appears to have therapeutic results. It really is a dance class. And that’s why it’s exciting and why it works, I think. You know, nobody wants to do therapy, including me.

What does your post-Mark Morris future hold?

My performing career is gradually winding down. While I didn’t always know exactly what I wanted to, I know now. I am becoming a full-time choreographer, and I’m founding my own company. I know it’s a climate where that is pretty much the most stupid thing that a person could do, but I’m just going to do it. I also love the Dance for PD class. I do think that will be part of my life for a long time to come.