Prolific and eclectic, Nico Muhly (M.M. ’04) is currently one of the hottest composers on the contemporary classical scene. On November 29, his frequent collaborator Jennifer Zetlan (M.M. ’06, Artist Diploma ’09, voice) will give his latest work, Far Away Songs, its world premiere at her Alice Tully Vocal Arts Debut Recital Award concert. Among his other vocal works are the operas Dark Sisters and Two Boys, each of which premiered in 2011; the latter, a Metropolitan Opera commission, comes to the Met next season. Among Muhly’s recent orchestral commissions are a piece for the National Youth Orchestra of Great Britain that debuted at the BBC Proms this summer and a collaboration with Benjamin Millepied and the New York City Ballet that premiered in May. Recordings of Muhly’s works can be heard on Decca, New Amsterdam Records, and, most frequently, Bedroom Community, a label he co-founded. The eye-popping span of musicians he’s worked with includes Phillip Glass (Diploma ’60, M.S. ’62, composition), Bjork, Grizzly Bear, Bonnie Prince Billy, Jonsi from Sigur Ros, and Antony and the Johnsons. He spoke on the phone recently with Toni Marie Marchioni (M.M. ’07, D.M.A. ’12, oboe). 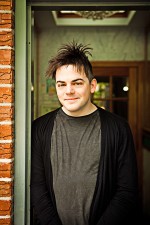 Tell us about the piece you’ve been writing for Jennifer Zetlan.
Jen is someone I’ve worked with several times in different contexts. She has sung a few songs of mine and has been in two of my operas. To get a commission from her is a huge honor for me because it means that she wants to continue singing my music.

How did knowing Zetlan’s voice influence your writing in this piece?
Having known her for four years, I have watched her grow—vocally and as a musician—and a lot of times that has been in the context of singing my music, which is kind of crazy. Writing for her has happened with a fluency that it wouldn’t have four years ago.

Has anything in your time at Juilliard affected you in a big way?
I quickly realized at Juilliard that there’s a certain amount that the department can do for you and that your teachers can do for you, and there’s another amount you have to figure out on your own. I had three great years of studying with Christopher Rouse, who appreciates that as a composer you have to have a really encyclopedic relationship with the canon. My last two years were with John Corigliano. He is really great at teaching structure and how to think about structure. One of the problems I had as a young composer is that my music was essentially 25 really great ideas strung together in a row. I never felt like there was any kind of organizing principle—it was just really fabulously orchestrated little gestures put in order.

Then, there is also the fact of existing in a community of musicians. I met a bunch of my closest collaborators at Juilliard. A good example is Nadia Sirota (B.M. ’04, M.M. ’06, viola). I realized that she and I could have a long conversation about music and could work on a million pieces together. I wrote a lot for her, but it wasn’t an assignment, nor was it something on which I was being specifically evaluated. Eventually, I ended up working a lot with friends and having things contextualized as what they wanted to be playing rather than just what I wanted them to be playing.

Tell us about your work with the Los Angeles Dance Project.
Part of its mission is to create interesting pairings between choreographers and composers, which is like Juilliard’s ChoreoComp class. It’s one of the most interesting ways to collaborate because dance is so close to music, but there’s a huge linguistic and physical divide between the way people talk about music and talk about what the dancers do. The L.A.D.P.  will enable people to work professionally at a very high level and be paired up with composers or choreographers in a way that wouldn’t be possible unless you’d gone to a place like Juilliard.

What was your first big break?
I’m not really sure if that’s how it works for composers. Weirdly, the piece of mine that has probably been played the most is for solo viola, Keep in Touch. I don’t know if you can call it a big break, but for a composer to have a piece played a million times is a great thing. With composers, there’s an idea that writing an orchestra piece is the big thing. But in reality, [it’s] completely exhausting, and it will only get played one or two times. There’s a strange amount of energy that one puts into something that lasts 20 minutes and then goes away. I feel for composers, the way that you measure—I don’t want to say success, but growth—is not that all of a sudden I got a huge commission from the New York Philharmonic, but more like this slow accumulation of people having your music in their fingers. That for me is much more relevant.

Is your composing process unique to a specific project?
There are similarities. One thing I do always—and this is actually something that I [learned] very explicitly from John Corigliano—is to have an overall map of the piece: the huge, way-zoomed-out Google map version of the itinerary. That’s something I find to be enormously useful to have, especially because I travel a lot. My actual physical process can get really scary sometimes, if I’m on a plane or in a hotel room where the desk isn’t very big. So having that document, a master plan on a single page, whether for a two-hour opera or for a solo violin piece, is incredibly grounding. That’s a constant. Then there are other differences, which I’ve found more and more have to do with where I am physically. Right now, for instance, I’m in a serviced apartment in Philadelphia. I have my universe under control and have made the desk a little bit bigger by bungee-cording the ironing board to the other side of it. It’s very MacGyver, much to the consternation of the housekeeping crew. But I have also right next to me, taped to it, a little schematic of the piece I’m writing. So despite the fact that I’m being held together by spit and twigs, I still have my sheet.