If the wind had been blowing, no one would have gotten hurt. The Trojan War ended as it began: with a human sacrifice to make the wind blow and allow the army to travel. For the ancient Greeks—who stood on the threshold between what we define as the primitive world and modern democratic society—sacrificing people to the gods brought uncertain and unsettling repercussions. The nascent concept of justice (as we know it today) pervaded Greek culture of the fourth century B.C., and was a catalyst for much of its drama. The ancient writers discovered that if you put people who have opposing concepts of justice into the same room, have them act relentlessly to see their version of justice done, and throw in the strong opinions of numerous gods, you get some good stories. 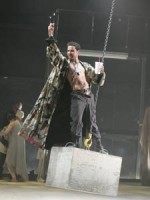 Brian Mertes returns to Juilliard this month to direct the second installment of The Greeks trilogy, The Murders. Last season, he directed part one, The War; seen here is Stephen Bel Davies in a scene from that production.

The Drama Division’s fourth-year actors (Group 37) embrace some of those stories this month with The Greeks, Part Two: The Murders, an epic synthesis of three plays by Aeschylus, Euripides, and Sophocles that have been compiled and adapted by John Barton and Kenneth Cavander. It is the second installment in a three-part series following the Trojan War and the lineage of the House of Atreus. Last year’s class of fourth-year actors performed Part One: The War, and the current class of third-year actors looks forward to completing the cycle next year with Part Three: The Gods.

This is the last full-scale production the members of Group 37 will present during their Juilliard career, and they are ready to go out with a bang. Says Dion Mucciacito, who plays Odysseus: “It’s an ensemble piece to the bone. Every person of our class adds a key element to the life on the stage.”

With a cast of 18 actors, a grand sweep of mythic history, and a body count that rivals many of this year’s bloodiest Oscar nominees, The Greeks is indeed a monumental way to end the season. Though the plays may seem extreme, they are increasingly relevant—focusing on a society recovering from a decade-long war, and the festering internal damages that become most apparent in a post-war setting. “These are questions about war, questions about choice,” observes Richard Feldman, assistant director of the Drama Division. “As we face our big questions, and the disasters and catastrophes, the questions the Greeks are asking are, in some way, more relevant than the ordered, hierarchical world of Shakespeare.”

Though the plays have a lot to teach us, the approach is far from didactic. Brian Mertes, the director of the entire Greeks cycle, is less concerned with recreating the ancient Greeks’ vision of the plays as he is with discovering, in collaboration with the actors, a fresh, significant understanding of them. “With Greek theater, all of these people—they’re all inside all of us. I have a killer inside me. I have a victorious king. I have a lost prince,” he says.

Not withstanding their universality, the role that the dramas Hecuba, Agamemnon, and Electra play in history is still vitally important. Explains Mertes: “They’re kind of like dramaturgical building blocks ... it’s the foundation of our western dramaturgy. The storytelling is raw, direct, rough-hewn. It’s a straight shot.”

The set for The Greeks is designed to complement that directness. Inspired by the catastrophes of Katrina and other post-disaster shelters, the stage is filled with beds that form various structures as the plays progress. The actors are all onstage all the time, even if their characters are absent or dead. It is an approach designed to trigger the audience’s own imagination, by whatever means necessary.

As the actors and designers have found, it is a mammoth undertaking. In the process of staging three of the most revered tragedies in the theatrical canon, the show will incorporate 22 original songs, 13 original dances, and countless props. (The numbers are estimated, as songs and dances may be added or cut during the rehearsals.)

Mertes brought in a creative team of artists who started working on the play months before the actual rehearsals began. Jonathan Pratt, who composed the music and serves as musical director for the show, has worked with Mertes numerous times, as has choreographer Jesse Perez, a Juilliard drama alum (Group 29).

Watching Mertes work, one might have the impression of watching a sort of theatrical collage-artist. Far from imposing his own vision of the play, he sets up the space meticulously, talks the actors through the parameters of the set, and then lets them play. They explore the world around them, letting the text guide them as much as the improvisations of their fellow actors. Mertes becomes a kind of omniscient eye, picking out the images or actions that strike him as “right,” no matter if they can be explained logically. “I’m in collaboration with everybody in the room,” he explains. “When I’m sitting in rehearsal, I’m not looking at my page, my notes, my plan. I’m looking at what’s actually happening.” As the actors have learned, a random act of silliness or a spontaneous laugh, jump, or dance move just may end up somewhere in the play.

The production demands all of the actors’ resources—and is therefore a vehicle that serves to give the public a true understanding of the capabilities of a Juilliard-trained actor. “We wanted to end with a strong ensemble show, to end the arch of the training,” notes Feldman. “These productions will show you what a Juilliard actor truly is,” adding, “It’s not your grandfather’s Juilliard.”

The fourth-year actors are excited about telling a story of such a grand scale, but there is a slight air of apprehension as opening night draws nearer. This is, after all, their last full production together. The combined emotions of excitement and nostalgia are palpable. The Greeks: Part Two will be a heightened experience, and the audience—or “visitors,” in Mertes’ terminology—will be witnessing a double narrative: that of the House of Atreus and of Group 37. For the actors, the production will be an unforgettable and bittersweet moment in their artistic careers, and in their lives.