During the summer of 1939, an unlikely but lasting friendship developed between a Long Island department-store owner and a physicist who changed man’s concept of the universe. Juilliard alumna Joan Rothman Brill (’50, piano) has recorded a vividly personal account of the events surrounding this special friendship, told in her father’s words in her book, My Father and Albert Einstein (iUniverse, 2008). 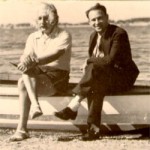 Albert Einstein and David Rothman at Nassau Point, L.I., in the summer of 1939.

How did your father and Dr. Einstein meet?

Three loves brought Dr. Albert Einstein and his family to Long Island during the summer of 1939: mathematics, music, and sailing! My father, David Rothman (age 42 at the time), was not a scientist. He owned Rothman’s Department Store in Southold on Long Island. Dad had heard rumors that Einstein was living nearby. One summer day, Einstein’s stepdaughter, Margot, visited the store and bought a stone that was used for sharpening sculpture tools. The next day, Einstein himself was a customer. He was looking for “sundahls,” and that is a famous story that is told in detail in the book.

What caused a friendship to develop between them?

Both Einstein and my father were amateur violinists. When Einstein learned that Dad played the violin, he invited him to visit so that they could play together, and the two of them had just met! Dad was amazed and thrilled. That was the beginning of their friendship. My father was not an excellent violinist … but after the duet attempts failed, Einstein and Dad just sat on the deck and chatted. Dad had been forced to leave school after the eighth grade in order to work, to help support his family. But he had a great thirst for knowledge and methodically read the “100 greatest books,” and educated himself. Einstein and Dad found that they had admired the same authors and had similar basic beliefs. That is one important aspect of their friendship.

The book describes quartet evenings that Dr. Einstein enjoyed very much. How did they come together?

My father arranged the quartet evenings; his brother-in-law was a violinist who knew other musicians. Many of the evenings took place at our home. I was there to meet everyone, and sometimes performed at the piano, even though I was only 9 years old! Einstein preferred to play with amateurs rather than professionals, so the professionals had to hide their identities somewhat. Occasionally, my father played in the slow movements. Strangers used to peer in the windows from the porch outside, to try to get a glimpse of the famous Einstein. Dad had to sneak him out the back door to take him home, to prevent a mob scene.

As a 9-year old girl, what was your impression of Dr. Einstein?

Einstein enjoyed young people, and he enjoyed joking with them. I was playing cards with my friends when he approached one evening and presented us with a riddle about how high we could jump if we lived on the moon! Of course, we didn’t know, so he gave us the answer. Einstein always inquired about me and my brother in the many letters that he wrote to my father.

Your family also developed a friendship with Benjamin Britten that year, and Mr. Britten once gave you a piano lesson. What do you remember about that?

I was playing Chopin’s Fantaisie-Impromptu during the summer of 1939. The right-hand run on the first page, which repeats four times, was very difficult for me, and I always missed notes. Mr. Britten couldn’t stand hearing that over and over again, so he tried to help me with it by asking me to play it slowly. Of course, I couldn’t do that. I told him that I could only play it fast! He informed me that if I couldn’t play it slowly, I couldn’t play it fast. So true! In 1942 I received a lovely letter from Mr. Britten, when he was in California. The letter is reproduced in the book.

What made you decide to write this book?

Einstein had many scientific colleagues, but perhaps not many friendships. Most people held Einstein in such awe that they couldn’t treat him as a normal person. My father was proud that he could relate to Einstein as a friend. They had many unusual conversations and shared events. I felt that the summer should be recorded somehow; so I was given permission to use this project for a term paper, for a biology class that I took as a part of my bachelor’s degree at Long Island University. It was 1963—24 years after that summer of 1939. Dad spoke into a tape recorder, and he recalled every meeting and every conversation. He spoke so beautifully that I hardly had to change a word or a thought. Actually, my book was written by my father; all I did was put it together and add my own comments and observations.

Matt Herskowitz: The Frontiers of Fusion
Richard Kogan: Music and the Mind